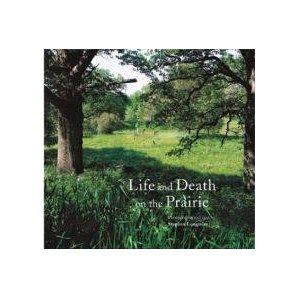 Iowa’s Rochester Cemetery (near Tipton) is one of the most unusual and bio-diverse prairies left in America, boasting more than 400 species of plants–337 of them native to the region–on its thirteen-and-a-half acres. Among them are fifteen massive white oaks that stood watch as the surrounding landscape was converted into farmland after Euro-American settlers arrived in the 1830s. The cemetery is the last resting place of these pioneers and their descendants, down to the present. Graves are scattered among the wildflowers, across hills that geologists consider sand dunes held in place by the deep roots of the plants and people and is beautifully presented in Life and Death on the Prairie by Stephen Longmire.

Pioneer cemeteries have been recognized as important prairie remnants and seed banks ever since Aldo Leopold, another Iowa native, called attention to them in his landmark essays of the 1940s, as he developed the new field of ecological restoration. At Rochester Cemetery, the drama of the prairie’s survival continues to this day, in a controversy that flares up as reliably as spring’s shooting stars. To botanists across the country, this place is a pilgrimage site. To local residents, it is either a source of pride or a shameful weed lot (some feel regular mowing would show more respect for the dead). To the photographer and writer Stephen Longmire, it is a place where the stories of the rural Midwest are written on the land-a long exposure, extending back to the days when Meskwaki Indians camped nearby and wildfire held back the forest. In the creative tension between people and place, Rochester’s prairie holds its native ground. Historic cemetery plantings grow wild among the native wildflowers, and bright plastic flowers decorate modern graves.

In compelling photographs and prose, Longmire shows this patch of original Iowa to be a living record of all the land’s uses since its settlement. (description provided by publisher)

Bad Behavior has blocked 1263 access attempts in the last 7 days.