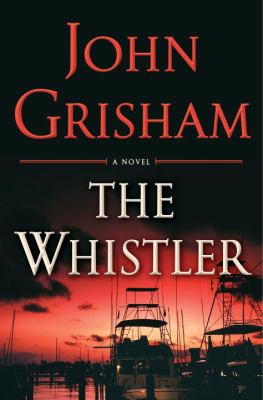 John Grisham is an author whose name, when I was younger, always had me cowering because he seemed to write SO MANY BOOKS. He’s up towards the top of the famous author list in my head alongside Nora Roberts, Stephen King, Danielle Steel, and James Patterson. Those five authors are all ones that I never really felt the need to read when I was younger because everyone was talking about them or reading them. Now as a librarian, I’m making my way through the authors that I previously steered away from. Current author choice: John Grisham.

The Whistler by John Grisham is a darkly mysterious, dangerous, and suspicious read. We all expect our judges to be ethical and balanced, but what happens when one goes rogue? The Florida Board on Judicial Conduct is responsible for investigating complaints that deal with judicial misconduct. Lacy Stoltz has been an investigator for the Board for the last nine years, something that gives her great joy, but also can give her headaches. Lacy is a lawyer, not a cop. This distinction is key to her job. The cases reported to her usually end up on her desk due to sheer judicial incompetence, not actual corruption. One case, however, lands on her desk that is so corrupt and a bit convoluted that Lacy and her coworker believe it may be made up. Investigations ensue!

Greg Myers, a previously disbarred lawyer with a new identity, has dropped this bombshell case on Lacy. He alleges that a judge in Florida is stealing millions of dollars and is more corrupt than any judge in the entire United States. Lacy must figure out where that money is coming from. That investigation leads her to the shady dealings and construction of a large casino built on Native American land. The Coast Mafia helped to build the casino and, as a result, is skimming money from the till. The leader of the Coast Mafia felt it would be best to have a judge in his corner, so in return for looking the other way and making sure certain cases fall the way of the Coast Mafia, the judge is getting some money too. How Myers’s informant came to know this information is messy, but the informant is keen on the fact that under Florida law they can collect millions by being a whistleblower. Lacy and her colleague are immediately suspicious of this complaint, but once it’s filed, they must investigate. Full of dark twists and turns, this book had me on the edge of my seat a few times. I’ll admit that it took some time for me to get into the plot, but I’m pretty sure that’s because I had listened to a very light and fluffy read before this. Highly recommend.