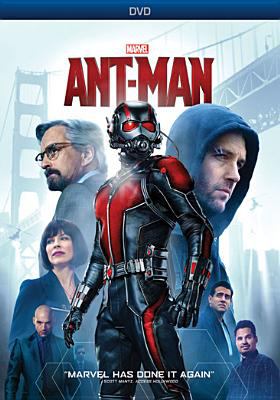 Ant-Man is a Marvel creation that most recently came out as a movie starring Paul Rudd as Scott Lang and Michael Douglas as Dr. Hank Pym. Dr. Pym was the original Ant-Man, the one who discovered the Pym Particle, a substance that had the ability to shrink items, most importantly a suit. He became Ant-Man and his wife became the Wasp. After a devastating accident, Dr. Pym hid away the formula and the process to find the Pym Particle, locking the suit away.

Flash forward to the present and viewers are introduced to Scott Lang, a burglar who has just been released from jail and is trying to turn his life around so that he can be in his daughter’s life. His roommate and a few friends approach him with the chance of a lifetime: they heard about a rich man who has a safe in his basement and if Scott can crack it, then they will be set financially for a long time. This heist changes Scott’s life and puts him in the sightline of a very powerful man, former Ant-Man Dr. Pym. Giving Scott a chance to reform his life and atone for his past crimes, Dr. Pym presents him with the opportunity to protect the Ant-Man suit and the formula from a group of scientists who wish to harness the power for dubious reasons. Dr. Pym mentors Scott in the ways to use the suit and how to harness all of its powers, while Scott works to change his life for the better. This movie is an excellent introduction to the background of Ant-Man and provides viewers with some pretty spectacular effects, while also keeping the mood light yet fill of action and adventure. 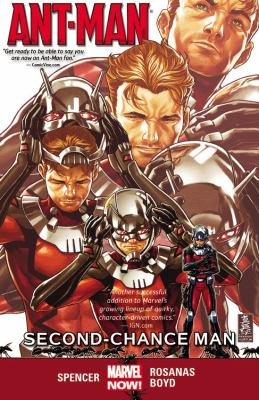 Moving further down the timeline is Nick Spencer’s Ant-Man. In this volume, Ant-Man is older, somewhat more mature, and has worked with a variety of other superheroes. Just because he’s older doesn’t mean he has become a better superhero though. Throughout this graphic novel, it’s pointed out to Scott that he isn’t even the best Ant-Man and that some people still think he’s dead.

Scott is still trying to better his life and provide for his daughter, something that this graphic novel shows has not been without some significant difficulty. Scott thinks he has it made when Iron Man calls and offers him a job, but quickly realizes that he’s only one of many candidates and just because he’s worked with Iron Man before doesn’t mean he is going to get the job. The realization that his ex-wife is moving with his daughter to Florida and a rumble with an old foe throws Scott off-balance, leaving him to try a new business venture that takes Scott and his family down a dangerous path where he is forced to see that what he thinks is right for his family and what is actually right for his family are two very different things.

What I liked best about this graphic novel is that if you are confused about something that is happening, the writers have written in explanations and have also provided you with the issue numbers of the different graphic novels that will help you to fill in the holes. Plus Scott does a lot of reflective thinking, so that helps. It’s brilliant! Check out this graphic novel for a more sarcastic and humanized approach to a superhero who is just trying to get his life together.