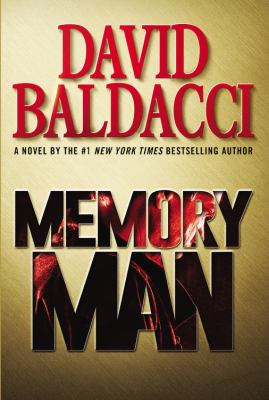 Memory Man by David Baldacci is the very first Baldacci book that I have ever read. His books have never caught my eye before, ie. the covers just don’t appeal to me, but I decided to give one a try. Looking through OverDrive, I found Memory Man. The premise was intriguing and seemed to be marginally similar to author Robert Galbraith’s Detective Cormoran Strike series.

Memory Man grabbed my attention with this tagline from the publisher: “A man with perfect memory…must solve his own family’s murder”. Interesting premise, right? I thought so. The idea that someone with a perfect memory would have difficulties figuring out who murdered his family had me instantly thinking about how frustrating that must be. I knew I had to read it. (And bonus: It’s the first book in a series!)

Amos Decker is a big man, not just personality wise, but size wise as well. In college, Decker played football. He was so good that he was able to go pro. Decker was the only person from his hometown of Burlington to ever go pro, a fact that everyone in town was proud of and something that Decker cherished. His life was changed because of football though. Decker’s very first pro football game, his very first play on the field, he was the victim of a violent helmet-to-helmet collision that destroyed his chances of ever playing ball again. It also left him with an extremely rare side effect: Decker never forgets anything. His mind seems to record everything.

Flash forward twenty years and Decker’s life is about to change again. Now he’s a police detective married with a young daughter. Returning from work late one night, he discovers the murdered bodies of his wife, daughter, and brother-in-law in his house. Decker is broken, his life is destroyed, and he quickly spirals out of control. He quits the police force, ends up losing his home, and finds himself living on the street. He ends up doing odd jobs as a private investigator, just enough work to provide him with a place to live in a somewhat seedy motel.

Over a year after his family’s murders, a man walks into the police station and confesses to the murders.  At the same time, Burlington is rocked by a catastrophic event that has the ability to cripple the town. Decker’s old partner comes to him seeking his help. He soon finds himself investigating his family’s murders and helping with the other police investigation. In order to get to the truth though, Decker must rely on his perfect memory, something that he has tried to manage and get control of over the years.

I really enjoyed this book. It was fast-paced, dealt with sticky subjects, and had me wondering who the bad guys were the whole time. I sometimes find thriller plots to be convoluted and even predictable, but Memory Man was a blessing. It is a thoroughly engaging, mysterious, suspenseful thriller that had me on edge until the very end. 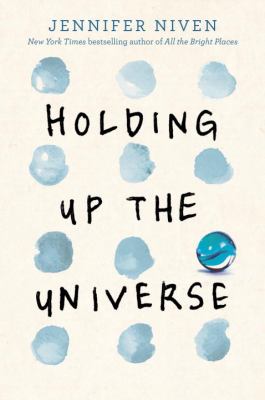 I’ve been reading a lot of young adult fiction in my spare time. A vast majority of them have dealt with sad topics: mental illness, suicide, death, endings of relationships, abuse, homelessness etc. These are all topics that teens deal with on a daily basis, so I appreciate the fact that there are resources out there that teens(and their parents/guardians/loved ones) can turn to if they need some help. However, reading all these angsty books with no break and with no happy ending in sight is throwing me down a rabbit hole of sadness. I needed a break or a book with a happy realistic ending, not a sad realistic ending. Enter Jennifer Niven.

I’d read All The Bright Places by Jennifer Niven last year and had loved her work (fair warning though: this book has a sad realistic ending dealing with mental illness and suicide). Flipping through a review magazine, I found Holding Up the Universe, also by Niven. The premise sounded like it could possibly end well and I was willing to risk it because I had loved her previous book so much.

Holding Up the Universe tells the story of Libby Strout and Jack Masselin. It is told from both of their points of view, alternating chapter to chapter. Libby Strout was once known as “America’s Fattest Teen”, a teen whose house had to be partially demolished in order to get her out of it. Back in school for the first time in years, no one can see past her weight. She’s still just the fat girl even though she’s lost 300 pounds. After her mom’s death, Libby is left picking up herself, her father, and their grief. She is ready for the new start high school has to offer.

Jack Masselin is the quintessential high school popular boy. He has swagger and the ability to give people what they want. He is able to fit in. While he seems like he has it all together, Jack has a major secret. He cannot recognize faces. Jack has prosopagnosia, the inability to recognize people by their faces. Everyone he meets, he has to try to figure out who they are by their identifiers: big hair, beauty mark, Mohawk, etc. Jack gets through life by being the funny, charming guy, but doesn’t let people get close.

Jack and Libby’s lives become entangled together in the aftermath of a cruel high school game. Sitting squarely in community service and group counseling together forces them to make a connection. This connection changes both of their lives, forcing them to confront issues that neither of them realized they are carrying. Will their connection change their world for the better or for the worse? Add in cruel high school students, family issues, obesity, brain injuries, and the possibility of love and Jack and Libby are in for a crazy ride of self-esteem, self-reliance, and teenage angst. Holding Up the Universe was the exact book palette refresher I needed.