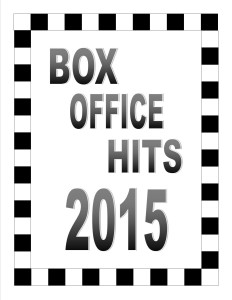 As 2015 came to a close, I found myself curious about how the box office turn out was for 2015. Box office refers to the grand total a particular movie made while it was in the theaters. Sales are counted for United States and world wide. What I was most interested in was the United States totals. 2015 was a great year, grossing more money than ever with a grand total of 11,125 million dollars. The big push to put 2015 over the top came at the very end of the year, when the highest grossing film of all time was released to theaters.

Box office numbers are taken from Box Office Mojo. The top ten highest grossing films of the year are as follows:

10. Spectre with $198,579,382 – Spectre is the most recent release in the James Bond movie franchise. DVD release in early February.

9. Cinderella with $201,151,353 – Cinderella  is the remake of the classic fairy tale starring Lily James as Cinderella.

4. Inside Out with $356,461,711 – Inside Out is a Disney Pixar animation film that gives personalities to emotions.

3. Avengers: Age of Ultron with $459,005,868  – Age of Ultron is the second film in the Avengers series and part of the even larger scale Marvel franchise movies.

2. Jurassic World with $652,270,625 – Jurassic World is the next installment to the popular 90’s Jurassic Park trilogy. Fourteen years later the park is bigger, better, and more dangerous than ever.

1.Star Wars: The Force Awakens with a whopping $819,687,937 in only 14 days! – The Force Awakens is the long awaited 7th installment in the Star Wars movie franchise. It takes place about 30 years after episode VI.

For a complete list of 2015 box office movies go to Box Office Mojo.

Bad Behavior has blocked 1687 access attempts in the last 7 days.