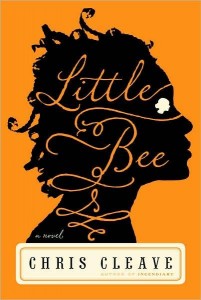 Little Bee offers a lot to talk about, but without a lot of substance. It exhibits a weird tension between visceral and twee, with its pretty cover, gimmicky blurb, Dickensian coincidences, and gritty portrayal of humanitarian crises in western Africa. It’s a book that doesn’t make you decide between ‘drama of unimaginable cruelty and violence’ and ‘saga of suburban ennui and infidelity’ – it just has both, and by virtue of that uniqueness, it’s already worthy of discussion. Additionally, the sadness of the subject matter and its real-life inspiration make this a heart wrenching book that will absolutely give book clubs fodder for great discussion.

There’s a lot of good in Little Bee; it’s snappy and readable, even beautiful in its language at times. Its setting contrasts the familiarity of London with the unknown of its asylum-seekers and Nigeria’s oil conflict in a surprisingly effective way. But there are lots of negatives too: the plot has turns so contrived you’ll wince, and Little Bee herself is so perfectly perfect that her nobility can be tiresome. Few of the characters are memorable and even fewer are sympathetic.

It also suffers from the plight of Changed Title Syndrome, wherein the publishers change the original title in an attempt to appeal to American audiences (this also famously happened with Harry Potter and the Philosopher’s Stone – because presumably, American kids would never stoop to read something with a word as dull as ‘philosopher’ in the title). In this case, the wonderfully apt and evocative title “The Other Hand” was rewritten to the rather plain and accessible “Little Bee.” Rather than calling attention to the central metaphor and most vivid scene of the book, the new title simply names the main character, and it’s rather banal by comparison.

“Little Bee” is an unusual, readable book that, while imperfect, would make a great choice for book clubs (provided all members are comfortable with some gritty, violent scenes).