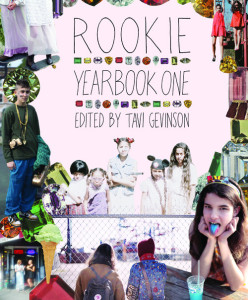 Get this book for any teen girl you know. Tavi’s online zine, Rookie Mag, has been collecting accolades since the fifteen-year-old blogger started it from her Midwestern bedroom. Tavi has been a respected style blogger since 2008, when she began her fashion blog Style Rookie at the tender age of eleven. Since then, she’s been invited to attend and review fashion shows all over the world, but it’s not just clothes anymore; this clever writer and all-around gifted young woman has created a magazine where teens can go for conversations with other teens about school, friends, music and movies, feminism, body image and self esteem, fashion, sex, and all the minutiae of teenage life that seems so monumental to those who are living it. She writes about the problems and the questions that real, modern teens have. She’s frank and funny and I wish I’d been even one-tenth as smart and confident as she is when I was a teenager. What I’m getting at is: here is a great, realistic role model. And a great book!

Rookie: Yearbook One is an ink & paper retrospective of the online magazine’s first year. It contains a lot of writing by Tavi, but it’s been touched by dozens of others; Miranda July, Lena Dunham, Aubrey Plaza, Joss Whedon, Patton Oswalt, and many others make appearances – either in pieces they’ve written for the magazine or as the subject of one of Tavi’s excellent interviews (I love how she is just as comfortable grilling Whedon about his modern-day interpretation of the sexual politics of “Much Ado About Nothing” as she is sharing a laugh with Plaza about how much they love the film “Reality Bites”). These are articles that matter, ideas that resonate, and interviews that are exciting and in-depth; it’s also lighthearted (you’ll love the section on how to cry without anyone catching you), and the graphic design of the book is phenomenal. If you have any taste for collage (and a little bit of the ridiculous) your eyes will pop at the juxtaposition of textures, photos, and hand-drawn illustrations. It’s just amazing, and I wish so much that I’d had it when I was a teenager!

Bad Behavior has blocked 1413 access attempts in the last 7 days.