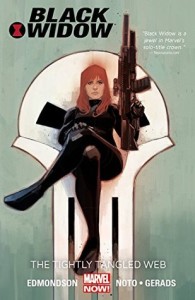 If I sounded impressed with my review of the first volume of Nathan Edmondson’s Black Widow a few weeks ago, then I can firmly tell you that his second volume, Black Widow: The Tightly Tangled Web intrigued me even more. This volume shows you that Black Widow is indeed a human capable of feelings. (If that statement made you roll your eyes, let me explain.) In the first volume, and really throughout any of the Avengers movies, the Black Widow, aka Natasha, is shown as a cold,  yet ruthless, killing machine, one who will do whatever it takes to complete her mission, an M.O. that makes perfect sense since she used to be a KGB assassin. Edmondson expands upon Natasha’s past in this second volume, allowing readers a glimpse behind the dark curtain that hides Natasha’s true self.

Black Widow: The Tightly Tangled Web tackles the bigger idea of superheroes as a whole. In both volumes, readers see Natasha as part of the Avengers and SHIELD, going on missions for them, but also going on side jobs in order to atone for her past life as a KGB assassin. Once the Black Widow is seemingly outed through media footage splashed all over the news, other superheroes, SHIELD operatives, and the regular public are forced to question the idea of superheroes operating outside the reach of the law.

Another ongoing thread in this second volume focuses on the people who come and go in Natasha’s life. In San Francisco, Natasha runs into her ex Matt Murdock, also known as Daredevil, while hunting for cyber terrorists. On what she thinks is a simple mission in Prague, Natasha finds herself face to face with the Winter Soldier, who unbeknownst to her is there to stop the train from being robbed. Later, she runs into the Punisher, aka Frank Castle, a former Marine turned vigilante, while searching for information about a deadly criminal network that seems to be running communications off of the boat she is searching.

Add in a run-in with Hawkeye and this second volume reads less like a stand-alone Black Widow volume and more like a combination superhero graphic novel, which I found to be equally disappointing and riveting. I did enjoy the interactions she had with each person because it added an extra layer of depth to Natasha as a human being and highlighted important aspects of her past and her personality that would have been missed if readers were only privy to the conversations between her and her attorney, Isaiah. (Isaiah seems to be her closest friend and confidante and the doozy of a mess that Natasha finds herself in in this second volume comes back to harm Isaiah.) I just wish this volume had been more of a focus on Black Widow, more of a true stand-alone comic. I personally can’t wait for Edmondson’s new issues of Black Widow because it sounds like they will show more about her background. 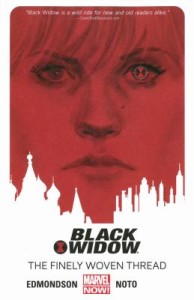 When I watch any of the Avengers movies or really any movie about a superhero, I get really excited because it gives me more of a chance to understand each of their backstories. Sadly, one of the Avengers doesn’t have her own movie and it’s the one that I have the most questions about: the Black Widow. I’ve had to exhaust other sources to learn more about this infamous former KGB assassin and why she is on a mission to atone for her past sins.

My newest Black Widow source of information is Black Widow: The Finely Woven Thread by Nathan Edmonson. (This is currently part of a series, so stay tuned for my review of the second volume whenever I can get my hands on a copy!) In this first volume, readers are introduced to the mysterious Natasha, who is known to her friends and enemies alike as the Black Widow. When she’s not helping the Avengers or on missions as an agent of S.H.I.E.L.D., Natasha is working to make up for her past as a KGB assassin. She still utilizes the tools and tricks she learned as an assassin, but is now able to pick and choose the missions that she goes on. In this volume, she finds herself thrust up against the “Hand of God” on an undercover mission in Russia. With the mention of Chaos, she quickly finds herself entangled in a deadly plot that has wrapped its web across the globe. No one is safe from Chaos’ grasp, not her close friends or even her employers.

This first volume mainly introduces readers to the sorts of missions that Natasha goes on and the people that are closest to her. She’s still cold-hearted, but as you follow Natasha through her missions and through her interactions with the stray cat by her apartment, you realize that she is working to better herself the only way she knows how. It gives a little more depth to the character of the Black Widow that Scarlett Johansson plays in the Avengers movies. This volume gives you enough information about present day Natasha to understand how she operates and gives you very little information about her past, just enough to leave you curious and hopeful that the subsequent volumes will explore more about her past.

In Black Widow: The Finely Woven Thread, Edmondson has written an introduction into the Black Widow that allows for the truly artistic work of artist Phil Noto to shine. Throughout this graphic novel, Noto varies the colors used and the way he draws to highlight different scenes and the many different places where Natasha travels. The mysterious nature of Natasha as the Black Widow is elevated by the dark colors and stylized way of drawing the Noto employs. Edmondson’s words serve to add another layer of depth to Natasha’s character, since she’s primarily alone and spends a lot of time thinking out her next actions in her head.