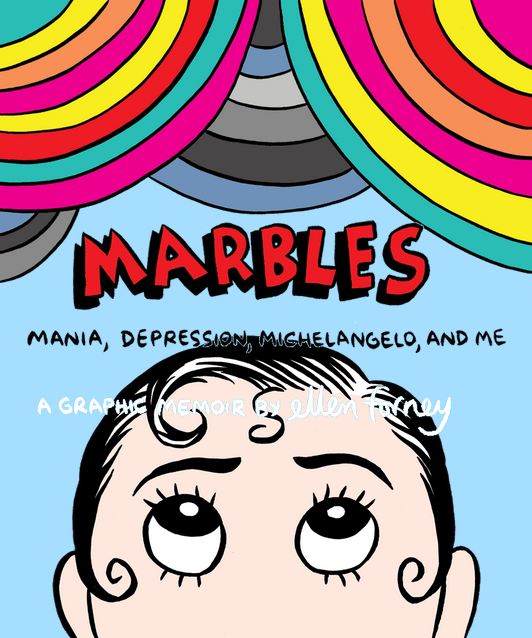 In the past few years, I think it’s safe to say I’m hooked on graphic novels! I don’t make it out of the library on most days without bringing at least 1 new title home to read (though I usually bring a bag-full!). Marbles: Mania, Depression, Michaelangelo, & Me initially jumped out at me, like so many graphic novels do, because of the colorful artwork on the cover; but Ellen Forney’s  frank, funny, and painful reckoning with the depression & mania that accompany Bipolar disorder is honest, brave, and thought-provoking.  For the skeptics who doubt that graphic novels can be emotionally complex & deeply moving, try reading Hole in the Heart: Bringing up Beth, a 2016 work of graphic medicine about raising a daughter with Down’s Syndrome.You won’t find a summary of Forney’s autobiographical memoir here: just read it for yourself.

I don’t know anyone who isn’t touched by mental illness in some capacity, either through personal experience or knowing or loving someone who struggles–often silently-with bipolar or another mental illness. Yet it’s still an elephant in the room or–if not an elephant–some other misunderstood creature who looks a lot like your neighbor, sister, boyfriend, or cousin. Forney’s autobiographical sketch even compares identifying people who suffer from bipolar with “outing” someone –the often intentionally cruel practice of shining a light in a calculated way in order to  “expose” someone as unusual or different.  But Marbles is a victory in the fight to de-bunk the myth that people with mental illness are certifiably “crazy”, “scary”, and “dangerous”. A graphic novel like Marbles  is another step in the right direction of normalizing and de-stigmatizing mental illness. These is a genuine, candid representation of mania and depression.

One of the defining themes in this work is the interplay between madness & creativity.  Would treatment of her newly-diagnosed illness hamper her creative energy? Would treatment change or dull her creative identity? It is certainly a terrifying thought to consider that medications may not only not work, but they may change an essential part of who you are–an essential part that you may not want to change.  Forney discovers, like so many others, that should she “join the ranks” of those artists who came before her who also suffered with bipolar disorder (historically referred to as manic depression), she would find herself in good company. Great company, even. Truth be told, there is such comfort to be found in placing yourself along a continuum–of knowing of the others who came before you.  Through the act of reading, Forney also found comfort, reprieve, and solidarity. An Unquiet Mind by Kay Jamison, for example, is a particular book that was mentioned within the pages of Marbles. Forney does not sugarcoat the profound sense of loneliness she felt as she cycled in and out of mania and depression.

This book will invite you to contemplate the controversial issues surrounding mental illness, including diagnosis (misdiagnosis is notoriously  a major cause of harm and medical error in the united states), medication, other modes of treatment (alternative & complementary therapies such as yoga).  A particularly intriguing insight related to Cognitive Behavior Therapy (CBT), a treatment modality that enables people to improve their symptoms by recognizing and challenging or calling-out the negative self-talk cycles that are a cornerstone of mental illness. Although Forney didn’t delve particularly deeply into this aspect of the memoir, it is clearly an essential part of her road to finding balance and stability in her life (and ultimately even coming to terms with wanting to find balance in the first place).  Keep in mind, this graphic memoir never claims to offer medical advice but rather is the testament of the author.

Ultimately, this book highlights Forney’s experience living with bipolar illness in a way that is especially human: raw, passionate, sanguine, and vulnerable. I was heartened by the author’s resolve throughout and by the last page and I think you will be too. 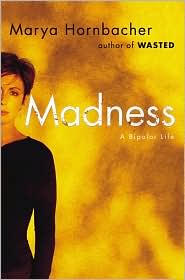 Although Marya experienced strong signs of manic behavior at age four it wasn’t until age 24 that she was finally diagnosed with the most severe type of bipolar disorder. Marya takes you through her “crazy” life up until her diagnosis. The tales of her episodes are surreal but the stories of how she copes with them are even more so. She stabilizes her moods with massive amounts of alcohol (starting at age 10) and other drugs. She distracts herself from her mania by focusing on food obsessions (anorexia and bulimia) as well as “cutting”.

Madness was very insightful, clearing up some of the stereotypes of mental illness and being institutionalized (nothing like Nurse Ratched in One Flew Over the Cuckoo’s Nest). This was a fascinating and fairly fluid book considering the disorganized nature of the topic. Marya Hornbacher is also the author of the best selling novel Wasted chronicling her struggle with anorexia and bulimia.

Bad Behavior has blocked 1635 access attempts in the last 7 days.