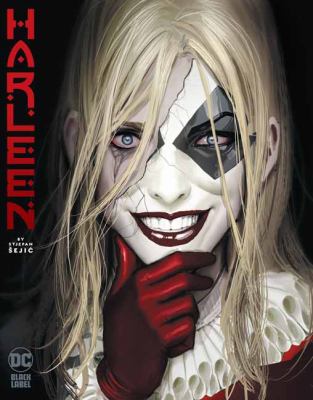 When I start something new, I have to start at the very beginning. Lately, I’ve been wanting to take a deep dive into the world of graphic novels, but I know I’d quickly get overwhelmed. However, Harleen might be the perfect fit to both start at the beginning and jump into an established universe. The new graphic novel from Stjepan Sejic tells the fall-from-grace origin story of Batman and Gotham City’s favorite antihero — Harley Quinn.

We meet a restless Dr. Harleen Quinzel looking for funding to develop a method for detecting stages of deteriorating empathy. What are the trigger points throughout a lifetime for creating a sociopath? After presenting her theory at a conference she encounters a classic Joker / Batman duel on the streets of Gotham City.

The outcome of this fight is:

When Dr. Quinzel meets her new patient, the Joker (Mr. Jay, she respectfully calls him), she becomes infatuated with him. As she reflects often, the road to hell is paved with good intentions. Dr. Quinzel alternates between falling for his manipulation that he is the perfect candidate for her study, therefore an asset to her career, and believing she can cure the Joker from his mental illness.

Dent and the Executioners stage a breakout of the Arkham Asylum. In an effort to protect the Joker, Quinzel kills a security guard, falls into the arms of the Joker and is baptized Harley Quinn.

The characters are complex and intriguing. More than once, I found myself questioning if Harleen and the Joker were  manipulating other characters, themselves or me, the reader. Harleen and Harvey Dent struggle to keep a grasp on reality, while the Joker seems eager to get back to a world chaos and madness.

Clear flashbacks and subtle flash-forwards compel the story through a coherent timeline. There is so much set up for future stories, I’m looking forward to reading anything else that comes out of Sejic’s Harleen story and going further into this universe.