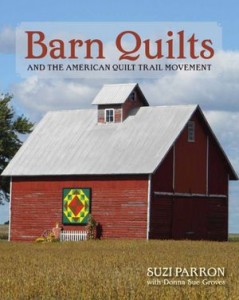 The story of the American Quilt Trail, featuring the colorful patterns of quilt squares writ large on barns throughout North America, is the story of one of the fastest-growing grassroots public arts movements in the United States and Canada. In Barn Quilts and the American Quilt Trail Movement Suzi Parron travels through twenty-nine states (including Iowa and Illinois) and two Canadian provinces to visit the people and places that have put this movement on America’s tourist and folk art map.

Through dozens of interviews with barn artists, committee members, and barn owners Parron documents a journey that began in 2001 with the founder of the movement, Donna Sue Groves. Groves’s desire to honor her mother with a quilt square painted on their barn became a group effort that eventually grew into a county-wide project. Today, registered quilt squares form a long imaginary clothesline, appearing on more than three thousand barns scattered along one hundred driving trails.

Bad Behavior has blocked 1342 access attempts in the last 7 days.