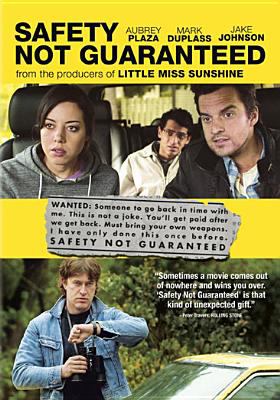 Wanted: Somebody to go back in time with me. This is not a joke. P.O. Box 91 Ocean View, WA 99393. You’ll get paid after we get back. Must bring your own weapons. Safety not guaranteed. I have only done this once before.

After seeing this personal ad run several times in the magazine he works for, Seattle Magazine, Jeff (Jake Johnson from The New Girl) pitches investigating the person who is running the ad.  The editor agrees and allows him to bring two interns with him, Darius (Aubry Plaza, Parks and Recreation) and Arnau (Karan Soni) to Ocean View, Washington to track down the potential time-traveler, Kenneth (Mark Duplass).

Darius quickly takes over the investigation, building a bond with Kenneth, despite her early skepticism.  Plaza plays Darius so exquisitely that you begin to see Kenneth through her eyes. Quick to roll her eyes or let out an exasperated sigh on Parks and Recreation, she uses subtlety in her facial expressions in this movie that one might not expect. The story is dark, funny, and smart, and the actors all feel fluid and natural, despite their characters being thrust into odd situations.

Fans of Jeff Who Lives at Home, Win Win, Crazy Stupid Love, and Silver Linings Playbook will want to pick up this quirky story about regret and love.