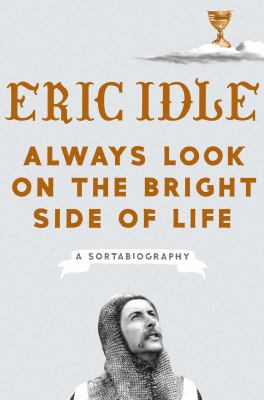 Always Looks on the Bright Side of Life is a sort of biography by Eric Idle – famous actor, writer, performer, comedian and singer-songwriter and famous along with the other Python comedian-writer British gents John Cleese, Terry Jones, Graham Chapman, Terry Gilliam, and Michael Palin, for the cult classics Monty Python and the Holy Grail, Monty Python’s the Life of Brian, and Monty Python’s the Meaning of Life to name a few. Eric Idle’s jet-setter lifestyle is a story of the rich and famous Brit rockers and British comedians spanning nearly five decades.

Can’t help but being a big Monty Python fan! So if you are interested in a bit of the Pythons back history from the viewpoint of one its members then you will enjoy Eric Idle’s personal story –  part memoir, part autobiography in this quick interesting read. Much of Idle’s stardom and famous relationships are unique….being friends with the likes of George Harrison, Mick Jagger, David Bowie, Carrie Fisher, Robin Williams, and Steve Martin to name a mere few, putting it in the readers face that he really “lived” a rock n’ roll lifestyle. His comedic writing is famous, his many songs and lyrics – especially “Always look on the Bright Side of Life” has become a legendary song as it is ironically the number one song played at British funerals making him a legend in his own lifetime…which Idle perhaps seemly discontent with the legend status seems to dislike and perhaps inadvertently fears a bit, being, no pun intended, idolized.

In his concluding chapters the true meaning of the book begins to emerge towards the end as to why he wrote the book in the first place. Eric Idle painstaking goes over the deaths of many of his actor/comedian/singer-songwriter friends that have recently died, especially David Bowie, Robin Williams, and Carrie Fisher, all of which he was very close to and the question of their mortality and his own mortality and legendary status seems to have been what spurred the writing on the account of his own life, mixed with a bit of personal history and the life and death of his close friends. Good read even with the bit of fluff about the lives of the rich famous intertwined throughout. He has really lived a glamorized and full life. Highly recommend.

Bad Behavior has blocked 1152 access attempts in the last 7 days.