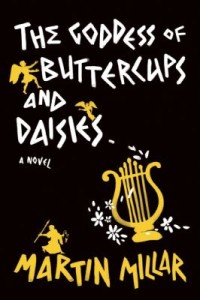 Do you like reading about ancient gods and goddesses like Aphrodite, Athena, Zeus, etc? I know I do. One thing I found lacking when I was reading about them was that there was never any story about their day-to-day lives. Sure, everyone knows the Athena sprung whole out of her father Zeus’ head after he swallowed her mother to try to keep her from being born, that Aphrodite rose full-formed out of the sea foam, and that Zeus was a philandering God who had many different girlfriends and illegitimate children despite the fact that he was married to Hera, the goddess of weddings and marriage, but what about their everyday lives?? Martin Millar has attempted to tackle this question in his new book, The Goddess of Buttercups and Daisies.

In The Goddess of Buttercups and Daisies, Martin Millar looks at both the daily life of the gods and goddesses, but also at the lives of the people who relied on them to make their lives work. (Admittedly more attention is paid to the citizens than to the gods, but interesting tidbits and stories are thrown in for good measure.) In this fantasy epic, the lives of Athenian citizens are in dire straits as the city is in its 10th year of war with Sparta. In hopes to end the war, a peace conference is being held around the time of the festival of Dionysus, the Greek god of fertility and wine who was also known as a patron of the arts.

Aristophanes is struggling to get the necessary funds to guarantee his play’s success and to make up for the fact that he didn’t win first prize at last year’s festival. His rival playwrights are receiving any and everything they could possibly want, while the politicians and festival sponsors seem to be conspiring to make sure his play fails gigantically. One group in town wants peace, while the other group wants war to continue. Aristophanes’ play about peace will never succeed without money, so he is forced to make some deals with some less-than-reputable people in town. Add in various people praying to the gods and asking for help and soon Athens finds itself the center of attention of some meddlesome gods who are willing to do whatever it takes to get the outcome they desire.

This funny, compelling, and witty adventure into the lives of average Athenian citizens and the gods they turn to for help will have you eagerly turning the page to see what destruction and mayhem could possibly come next.

Bad Behavior has blocked 2353 access attempts in the last 7 days.