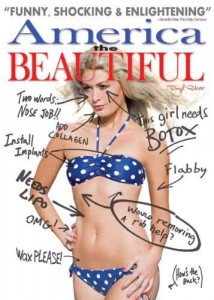 At the beginning of his award-winning documentary, America the Beautiful, Darryl Roberts explains that he had once broken up with a wonderful woman because he had believed he would find someone more attractive than her. Later, when she was happily married to another, he realized his mistake and set-off to make this documentary about what it really means to be one of the beautiful people and how much the beauty industry influences our desires and opinions. Much of the film includes what has been seen before: the truth in image retouching, sex in advertising, too-thin models, etc, yet the film keeps the material engaging by presenting it from the viewpoint of a man who once felt responsible for making women feel unattractive, but is baffled to how and why.

The film’s most emotional scenes are those which follow a 12 year old girl as she is pulled into the world of modeling, treated like a queen, and then called fat and put of a job before she turns 16. We see her sexily strutting down the runway and attending lavish after-parties, crying when her mom won’t allow her to wear a push-up bra to school, treated harshly by her school’s principal who disapproves of the fashion industry, and sadly watch her fall into a depression as she loses her career and her confidence. The film is harsh on the fashion industry, and although I still plan to continue enjoying the newest issues of Vogue, Elle, & Glamour each month, I was surprised and horribly disappointed in the lack of sensitivity displayed from the magazine representatives during their interviews.

Overall, I would recommend this documentary to women and girls of all ages (and men and boys as well) as everyone can benefit from America the Beautiful‘s message that each person’s beauty should be celebrated.