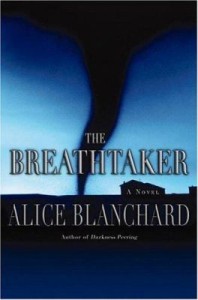 Tornados are featured in several recent books – from literary fiction to genre mysteries.

In Sing Them Home by Stephanie Kallos, a tornado is the catalyst for the trajectory of the lives of several people. A 1978 storm takes the life of a mother; many years later the dysfunctional siblings gather for a funeral.

The Stormchasers by Jenna Blum is another story about the effects of tornados on a family. A sister joins a group of storm chasers in order to locate her mentally ill brother, who is a storm chaser, himself.

A 1963 tornado in Oklahoma changes the lives of four people in crisis in Five Days in May by Ninie Hammon.

There are rumors of a movie of The Breathtaker by Alice Blanchard.  Set again in Oklahoma, this is a fast-paced thriller about a police chief who realizes that foul play, rather than the storm is the cause of death for several deaths. The murders mount as the tornado season progresses.

In other books, a tornado is not the driving force in the narrative or psychology of characters, rather it’s a convenient plot point.

The Riesling Retribution by Ellen Crosby is a mystery that begins with a skull discovered after a tornado.

Similarly, in A Bad Day for Pretty by Sophie Littlefile a body is found in the aftermath of a tornado.