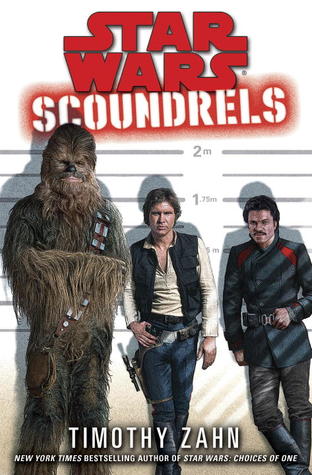 If you’ve seen Ocean’s Eleven (or virtually any other high-tech/high-energy heist film), you’re familiar with the plot of Star Wars: Scoundrels. Danny Ocean – I mean, Han Solo – enlists a crack team of a eleven people with specialized skills to steal a ridiculous amount of money. Headed up by Han, Chewbacca, and Lando Calrissian, this handful of ne’er-do-wells makes a bold attempt to steal 163 million credits in a make-or-break heist that could get Han out from under Jabba’s thumb for good. Or, it could get him (and all his accomplices) killed. There are two surprises at the end of this novel – one of them involving a whip and a gigantic boulder – and for those two alone, it’s worth reading. It’s also a lot of fun to re-enter the world of Star Wars and Han Solo: they’re enduring favorites for a reason, and this well-told, twisty tale does justice to that legacy.

Scoundrels takes place in the immediate aftermath of the destruction of the first Death Star (aka, right after A New Hope). The general public has only sketchy information about that debacle: they know that Alderaan is a cloud of space debris, and that the Death Star is now gone, but rumors of Rebel involvement are hardly realistic – surely a scrappy ill-funded few could never stand against the might of the Empire? And that, the central theme the original Star Wars is built upon, is what makes Scoundrels a success too. Surely this band of misfits can’t beat down the impossible odds against them and come away alive, let alone successful? But instead of Palpatine’s evil Empire, it’s a high-security vault owned by a powerful criminal organization. And instead of Danny Ocean, it’s Han Solo (who absolutely, positively, shot first).

Bad Behavior has blocked 1751 access attempts in the last 7 days.