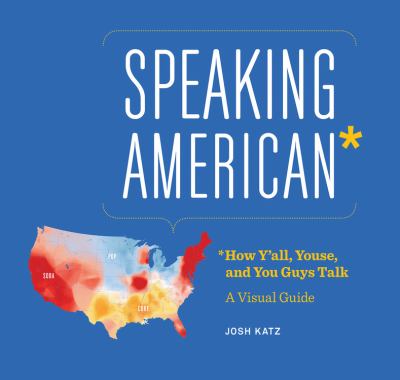 America may be a melting pot, but we prize our individuality and differences. These often show up in our language which has been influenced by heritage, location and history. By region, by state and even by city, these quirks and differences are shown off in Speaking American by Josh Katz.

Some of the differences are in pronunciation (for instance, how do you pronounce “caramel” – with 2 syllables or 3? If you’re from the Midwest, you probably use two. Most of the South and New England use three syllables). Other differences are in the actual word we use such as “green onion” vs “scallions”, “yard sale” vs “garage sale” vs “tag sale” (When I first heard Martha Stewart use the term “tag sale” – which is unique to the area around Connecticut – I thought it was something very fancy. I didn’t realize it was a plain old garage sale!)

Some differences are broad – most of the country pronounces aunt as “ant”, but North Dakota, most of Minnesota and New England pronounce it “ahnt” (although I had a third grade teacher that humiliated me in class for saying “ant”. She was not a good teacher.) And some differences are very fine, for instance, most of America calls a sandwich on a long roll a “sub” but from New Jersey thru Maine there are five different names other than sub – “hoagie”, “hero”, “wedge”, “grinder” and “Italian sandwich”.

I found this book utterly fascinating. I’m a born and bred Iowan so I have that Midwestern speech pattern down pat. I lived in Wisconsin for a couple of years, where they made endless fun of my saying “pop” instead of soda (this from people who call drinking fountains “bubblers”!) and I was told I had a Southern accent. Having a sister-in-law from Virginia (where I visit often), I can assure you that my accent it not, by comparison, Southern!

Speaking American is a lot fun with quick, often humorous descriptions and full color maps that show the prevalence of each word or pronunciation. A great peek into what helps make America unique!