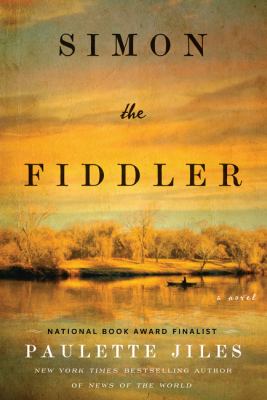 Set against an atmospheric backdrop of a rough and nearly lawless East Texas near the end of the Civlil War, Simon the Fiddler by Paulette Jiles is a story of overcoming hardship, taking chances and following your dreams no matter what.

Simon Boudin is a gifted fiddler that has been dogged by hard luck. He scrapes together a living by playing at dodgy taverns scattered through the wild west. By March of 1865 he has managed to avoid conscription into either army, but his luck runs out when his volatile temper gets the better of him and he gets into a bar fight. Hauled off to jail, he is picked up by the Confederate Army and forced into service. Because he is a fiddler and a very good one, he is put into the regimental band and manages to mostly avoid harm.

Just as the Civil War is winding down, Simon and his rag-tag band are sent to play for a victorious Union colonel who is throwing a party for the officers and their families from both the North and the South. It is here that Simon meets Doris, an Irish servant indentured to work for the colonel and his family. Although their meeting is brief, Simon and Doris make a connection. Driven apart by their duties – Simon sent away with the Army, Doris leaving with the colonel – they spend the next many months working to find each other again. Doris is miserable and feeling trapped as a servant while Simon struggles to save enough money from the jobs he and his band can find, enough to buy some land and make a life with Doris.

Through many obstacles – poverty, Yellow Fever, lawlessness, abject cruelty – there is also strength through friendship, a helping hand and the belief in love. While this is a slower read than Jile’s popular (and excellent) previous book News of the World, this book has the power to draw you in, to root for characters that are flawed but striving for something better, to morn their loses and cheer their triumphs.