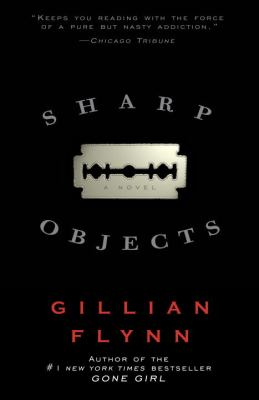 Sharp Objects was Gillian Flynn’s literary debut in 2006, followed after with Dark Places in 2009, Gone Girl in 2012, and The Grownup in 2014. Flynn’s first three works are all suspenseful, dark books full of thrilling chases, tragedies, secrets, and lies. I was introduced to Gillian Flynn through Gone Girl and immediately dived into her other books.

In Sharp Objects, Camille Preaker is working as a journalist for a second-rate newspaper, the Daily Post, in Chicago when her boss, Frank Curry, gives her a new assignment. Camille is to head to her hometown of Wind Gap, Missouri to cover the murder of one young girl and the kidnapping of another. Camille soon finds herself back in Wind Gap for the first time in eight years, working on her career-boosting serial-killer-in-the-making article.

In this psychological thriller, Camille struggles to break through small-town barriers to find the truth about what happened to those two girls. Once the body of the second girl is found, Camille finds herself swept into the story amidst all the rumors flying through town about who committed these vile acts. These murders are especially hard for Camille and her mother, as her younger sister died when she was 10 of a mysterious illness. Local police call on the help of a profiler from Kansas City, MO and Camille works closely with him to discover Wind Gap’s secrets.

Camille has secrets of her own. She comes from a dysfunctional family and one of the things she turned to to cope was self-mutilation. She was once institutionalized for this; her body covered in scars, words littering every surface of skin. Her trip back to Wind Gap forces her to relive her disturbed childhood, digging into old family secrets and things simmering under the surface. This book is truly suspenseful, leaving readers guessing about the murderer and the truth those simmering secrets until the very end.