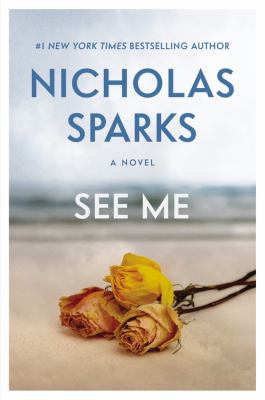 It’s time for me to be honest. I have not read a Nicholas Sparks book since high school. The movies never caught my interest either, so I just steered clear. In order to become a more well-read librarian, I have decided to expand my comfort zone and read books I normally wouldn’t. See Me by Nicholas Sparks is my latest outside-my-comfort-zone read. I started reading See Me thoroughly expecting a flowery romance with some kind of damsel in distress scenario and a dashing male hero coming to the rescue. I. Was. So. Wrong. Well sort of.

Maria Sanchez and Colin Hancock are the two main characters in this book and while they fit into some stereotypes, in other ways they completely break them. Maria is a lawyer and daughter of two Mexican immigrants who came to the US with nothing and now own a thriving restaurant. She has worked very hard to better her career with the end result being that her social life and friend circle is rather lacking. She does have a very close relationship with her parents and her younger sister though. Maria’s life is not all perfect. She is haunted by events in her past, events that ultimately led her to leave her previous job and move to a totally new town.

Colin is a 28 year old college student who is struggling to get his life back on track. He works out religiously and is avoiding all the people and places that led him to destroy his life before. Colin has spent most of his life tangled up in the legal system, as a result of a major anger problem and a myriad of other issues. He worked out a deal at his last court appearance, a deal that says that if he stays out of trouble, his criminal record will be completely expunged, his felonies erased, allowing him to become a teacher. However, if Colin gets back into trouble, he will go to jail for ten years and his record will not be cleared. Colin has stayed out of trouble with help from his best friend, Evan, and Evan’s fiancée Lily.

Colin and Maria have a chance encounter one rainy night on a highway in North Carolina. Maria tells her younger sister, Serena, about the man who changed her tire and Serena realizes that Colin is one of her fellow students. She arranges a meetup between Colin and Maria, hoping sparks will begin to fly. They do. Opposites obviously attract. Everything is going swimmingly between the two until a person from Maria’s past pops up who may ruin it all. Their budding relationship is put to the test as Maria struggles to figure out who is doing these horrible things to her. Colin also has to work through his anger issues and his protective instincts to put Maria’s wishes and well-being first.

Despite my reticence, I actually enjoyed this book. The story pulled me in and I found myself rooting for the characters. I also was not able to predict how the story would end, which is a major positive in my book.