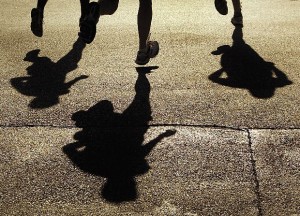 It was my hope this post will collect new knowledge, as well as construct a semblance of personal commitment resulting from the embarassment of not not taking the plunge and registering.  I started writing several weeks ago before the registration price went up, after this brave young lady was randomly chosen to draw the world’s spotlight for a shot at a small fortune. There would be no jackpot victory with any kind of Ed Froehlich advantage thrown thus beginner’s way.

The nadir of six months of accumulated self esteem occurred at the first of four Bix at 6 events, designed to fine tune the mettle of participants.  Methinks these events were designed out of necessity, as this footrace is clearly the magnum opus of convicted Nazi doctor Joseph Mengele.  However, by the looks of the participants, these training runs are more recess time for human gazelles than the potentially injury-prone.

The Bix 7 is what is it means to be a Quad-Citian.  It started as a Prohibition-era cornet playing phenom of dubious repute, became a little jazz festival spawned out of civic pride in the 70’s, and then blossomed into a monolith that almost eclipses our little burg.

However, given the Bix’s history and global renown, there is a surprising dearth of information out there when Google searching for “tips”, “strategy”, and “advice” outside of the sagelike wisdom to drink water and prepare for hills…for real people, that’s embarassing.   It’s 2010 in the age of global GPS and I sadly have to straw poll my neighbors for data.

Advice would be great, as there are hills, and there are HILLS.  Lower-case hills are what are alive with the sound of music.  Bix 7 HILLS are acts of hatred borne of a sadist’s wicked imagination.  They are the hills your grandparents walked up both ways to get to school in the snow.  As I sat there at the base of on mile 3 profusely swearing, I felt like Medic Wade in Saving Private Ryan.

So here are some techniques developed by a pale, sickly amateur, since over several decades of accumulated experience no one has posted any truly prescriptive course advice on the Internet.

1- Run the four Bix at 6 practices.  They are free, and an excellent value because of the safety personnel and water stations.  If you go in there half-cocked, you will have a rude awakening.

2- Take Brady excessively  slow so you have something left.

3- Take two waters at the turnaround and nurse off the second’s cup of ice, also pop 4 GU Chomps

4- Drink a water before the race and eat a bunch of rice at lunch and a couple bananas in the afternoon (can’t rightfully say if this helped, but it didn’t hurt).  Fine for 6pm, not sure about how this would work at 8am.

5– Fire off a rallying soundtrack at about 1.5-2 miles left as you pass Arlington or Davenport street as a reward for making it back up the cruel ascent.

6– Yes, you do need to prepare for hills, but where, what, why and how safely is what no one is covering.  Do a few circuits at Longview Park Rock Island’s bike path in your off days.  Sidewalks are for people paying attention.  Don’t be the person with the MP3 player oblivious to vehicles making turns.  Pedestrians have an obligation to be courteous that comes with their right of way.

With one week left, shin splints and knee pain are signs this bag of bones is betraying me.  Progress toward this foolhardy goal ebbs away with every day of inactivity.  Finish line “refreshments” and 35 dollars spent in vain are the only thing that will rouse me out of bed next week.  The forecast for running through a 7-mile sauna isn’t helping matters either…