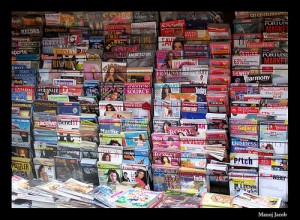 A recent Wall Street Journal article reports that newspapers and magazines still are alive and kicking.  “Magazines Team Up to Tout ‘Power of Print” describes a campaign by publishers to promote the value of  print magazines. “The Internet is fleeting. Magazines are immersive,” according to an ad to run in May issues of selected magazines.

Jann Wenner, the man behind the campaign, says that “just as TV didn’t kill magazines, the Internet was a threat only to publications that lost focus on what makes magazines unique. “In a certain way, this campaign is aimed at the magazine business itself.”

Magazine readership has actually been rising. Similarly newspapers are trying to get the word out that the readership of daily papers is up.

Michael Phelps is headlining the ads, so if you see his goggled face, check out the copy. It may surprise you.

Bad Behavior has blocked 1177 access attempts in the last 7 days.