It’s been absolutely ages since the last time I read a picture book, but these excellent titles make me wish I’d picked them up more often. I have been missing a lot of awesome stuff! Like any great book, the appeal of these titles isn’t limited to one audience or one time or one interpretation: whether or not you have children in your life, these books are interesting and worth your time. 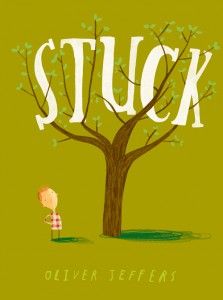 Stuck (words and pictures by Oliver Jeffers): “Stuck is a book about trying to solve a growing problem by throwing things at it,” Oliver Jeffers says in this video, where he reads most of the book. I could not stop giggling when I read it! Compulsively, obnoxiously, making-the-other-people-in-the-room-give-me-weird-looks giggling. When Floyd’s kite gets stuck in a tree, he chucks up his shoe to knock it down. When the shoe gets stuck too, he hurls up another shoe. Pretty soon, he’s lobbed everything he can think of at the tree and he has to think outside the box to solve the problem. Oliver Jeffers is a big name in picture books for good reason – the tidy blend of humor, art, and lessons learned make this a no-brainer for reading to kids. 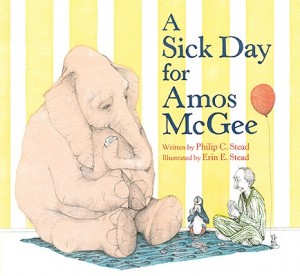 A Sick Day For Amos McGee (words by Philip C. Stead, pictures by Erin E. Stead): animals acting like humans is standard fare in children’s literature, but this book improves on the concept with a subtly playful story and illustrations that are just plain jaw-dropping. A zookeeper called Amos has a daily routine: chess with the Elephant, footraces with the Tortoise, quiet time with the shy Penguin, etc. When he takes a sick day, his friends at the zoo brighten his day in return. The pictures are warm and wonderful, with thoughtful expressions on all of the characters’ faces (animal and human alike). Picture-only subplots add yet another layer of story to this 2011 Caldecott winner. 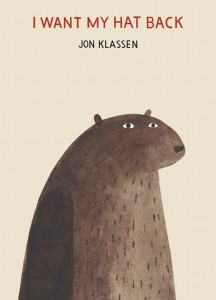 I Want My Hat Back (words and pictures by Jon Klassen): I can’t believe I’m about to write this about such a simple book, but I actually don’t want to reveal too much about it for fear of spoiling the ending! Imagine: spoiler alerts for a picture book. But here we are. I truly do not know how Jon Klassen gets so much deadpan humor and plain-as-day emotion into the faces of such simply drawn characters, but he manages it on every page. The ending has a refreshingly pithy, humorous, unapologetic taste to it. I’m eagerly anticipating getting my hands on a copy of his second book, This Is Not My Hat. 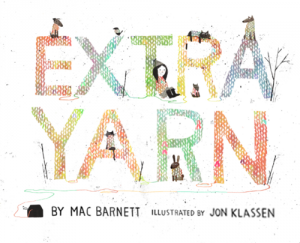 Extra Yarn (words by Mac Barnett and pictures by Jon Klassen): For an extra helping of Jon Klassen’s art, this book fits the bill beautifully. If you are a knitter or crocheter, you’ll be totally enamored of his illustrations here. A little girl discovers a box of infinitely replenishing color-changing yarn, and proceeds to knit sweaters for all of the animate and inanimate denizens of her town. The white space and gradual introduction of color, along with the touching story, make this a really special book.