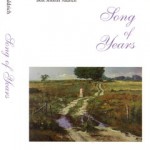 Song of Years (1939) The state of Iowa was still young and wild when Wayne Lockwood came to it from New England in 1851. He claimed a quarter-section about a hundred miles west of Dubuque and quickly came to appreciate his widely scattered neighbors, like Jeremiah Martin, whose seven daughters would have chased the gloom from any bachelor’s heart. Sabina, Emily, Celia, Melinda, Phoebe Lou, Jeannie, and Suzanne are timeless in their appeal — too spirited to be preoccupied with sermons, sickness, or sudden death. However, the feasts, weddings, and holiday celebrations in Song of Years are shadowed by all the rigors and perils of frontier living. This novel captures the period in Iowa’s history of Indian scares and county-seat wars, as well as the political climate preceding the Civil War. Mrs. Aldrich based this novel largely on her grandfather’s adventures in Iowa and the stories she heard as a child. from bessstreeteraldrich.com

I read this book while I was in high school. I would lay on my bed with the breeze coming though the windows and am transported onto the Iowa prairie. Bess’ description of the prairie, and every breathless detail made the characters believable, and the characters stay with me long after I finished the story. This book would appeal to readers on many different levels. First of all, there is the historical aspect of the struggle of life on the prairie when Iowa was just becoming state. Second, there is the story of a young girl, unsure of herself, growing to womanhood and finding out who she really is as she faces events that are out of her control. We witness Suzanne’s first infatuation, her crushing disappointment when she realizes her feelings are not returned, and, eventually, a true love that will outlast anything. The reader realizes that though the times may change, the emotions of growing up do stay the same.  Sometimes we need a good, old-fashioned story. It still remains my favorite book of all time.

One thought on “Re-Reads: Song of Years by Bess Streeter Aldrich”