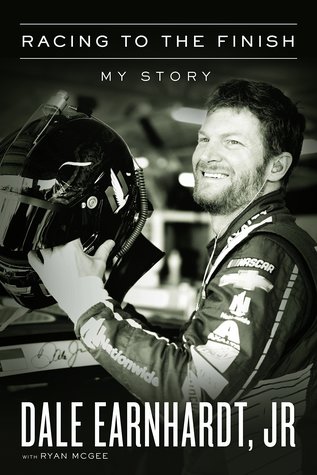 Racing to the Finish by Dale Earnhardt Jr. isn’t just about racing, it is about learning when it is time to quit. Wanting to go out on your own terms is something that every competitor in every sport discipline can identify with. After years of physical punishment and concussions, it was time for Jr. to retire from his #88 ride at the end of his 2017 season, in this book, Dale explains why.

Concussions have long been a specter in motorsports, no amount of safer barriers and HANS devices can fully cushion the blow of an impact when you smack into the wall at 200+ mph. Dale goes over how his injuries have affected him throughout his racing career, experiencing concussion symptoms after a wreck, then shrugging them off to get into the car the next week. Concussions and the lack of understanding around them affect sports of all shapes and sizes and Dale Jr. does a phenomenal job of going over how the concussions presented themselves from within the car and in his personal life.

Dale also goes over the recovery process after his final concussion at Michigan International Speedway in 2016 and how he decided after that crash that, if he recovered, he would only race one more season in NASCAR. This story not only goes over Jr’s history of concussions but also goes over his drive to recover in those months leading up to his final season. A great insight into a legendary driver with a very personable voice. The narration feels like Dale is right there talking to you about his struggles. It truly is an insightful book that I recommend to anyone that is a fan of motorsports or sports in general. This book does a great job of bringing attention to the problem of concussions in sports and how little they are talked about or understood.