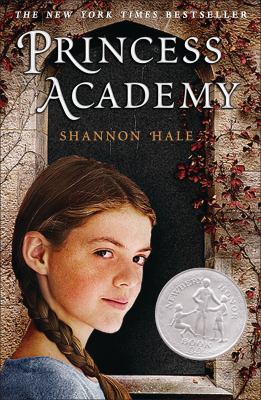 Miri feels useless.  While her father, sister, and all of her peers work in the quarry mining linder all day, Miri is forced to stay out of the quarry and tend to her home.  She believes that her father keeps her home due to her small stature, and this makes her a burden for the entire Mount Eskel village. When it is announced that the prince will be choosing the next princess from among the girls of Mount Eskel, Miri believes that this is her chance to prove her worth to her father and her community.

Princess Academy by Shannon Hale is a gem of a book. One of the biggest criticisms of middle grade fiction is that authors often tell, rather than show. They tell the reader how to feel about a character without letting the reader get to know the character on their own.  But Hale masterfully shows the reader that Miri is moral, quick witted, funny, loyal, and strong through Miri’s words and actions.  Just like Miri, the reader is conflicted about whether she would be better off marrying the prince and getting to travel and learn or if she should return to her village that she loves to help better her people.  This is a conflict that many smart, talented young women deal with as they make their transition from hometown life, to college, and then to a career.

While there are a number of fantastic princess books from Ella Enchanted to The Secret Lives of Princesses to The Princess Knight, Hale is able to do something unique with this book.  She isn’t just presenting an internal conflict of a young woman wanting to prove herself (although that conflict plays an important role in the novel), but Hale goes beyond that to create a protagonist that understands the importance of community and family.