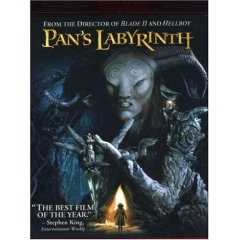 Visually stunning, chillingly frightening yet finishing with a ray of hope, the memory of this Spanish foreign language film will linger with you long after you’ve seen it.

Set after the bloody Spanish Civil War in 1944, Spain is being decimated by Fascists who brutally crush the Resistance. A particularly cruel and ruthless General brings his heavily pregnant wife and step-daughter Ofelia to the countryside to await the birth of his son. Left on her own, Ofelia explores the area surrounding the old farmhouse and explores a walled garden where a labyrinth leads her to Pan. This mysterious figure promises her that if she completes three difficult tasks she will save her mother and her problems will end. Suddenly Ofelia is caught in a battle between good and evil and the line between reality and fantasy blurs.

Beautiful, horrific, brutal, sometimes terrifying, this is a fairytale for adults about the power of the imagination and hope for the hero in each of us.

The library has many foreign language films available for check-out as well as many “independent” films that may not have shown locally. Be sure to browse our collection for amazing films from around the world.

One thought on “Pan’s Labyrinth”