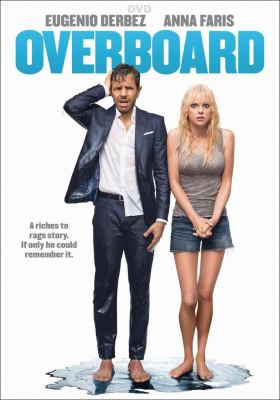 I remember seeing the original Overboard movie starring Kurt Russell and Goldie Hawn when it was released. I thought it was entertaining but not remarkable enough for a reboot so I was surprised to learn it was remade. This version stars Eugenio Derbez as Leonardo Montenegro and Anna Faris as Kate Sullivan. As far as I remember, it was basically the same plot with reversal of roles, Derbez plays the rich guy and Sullivan plays the poor woman. Eva Longoria plays Kate’s best friend, Theresa, and Mel Rodriguez plays her husband, Bobby.

I recently watched How to be a Latin Lover starring Derbez and was disappointed. There was potential for that movie to make fun of stereotypes and it was squandered at every turn while reinforcing some negative stereotypes along the way. Overboard was better. While it had the predictability that everyone should expect from a remake of an original that wasn’t highbrow cinematography to begin with, it took a huge chance, culturally speaking. To me, that was enough to make it interesting.

We got to see the family to which Derbez’ character belongs speaking Spanish with English subtitles. Yes, they are millionaires who are basically the telenovela (soap opera) portion of the movie, but their over-the-top drama is what makes them absurdly entertaining, just like actual TV telenovelas. They couldn’t have been a more realistic wealthy family because then the story wouldn’t have had the material for the plot. I also enjoyed seeing the more authentic portrayal of Latinos with the banter among the construction workers on Bobby’s job site. The romance felt a bit forced. I felt the daughters developed more of a relationship with Derbez’ character than Faris’ character.

If you’re looking for a lighthearted romp with the courage to include characters of color with their culture still intact, I recommend this movie.

Bad Behavior has blocked 1698 access attempts in the last 7 days.