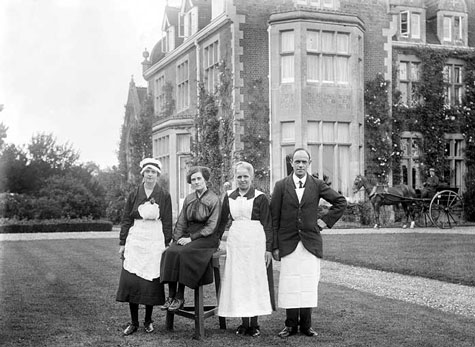 How is your month of Edwardian reading going? Have you found something that has grabbed your interest? If you’re still looking, maybe a movie would be the ticket – there are some gorgeous films set during this time period. Here are a few to consider:

A Room With a View – From the famous production team of Merchant and Ivory, this gorgeous film of love and romance stars Helen Bonham-Carter and Daniel Day-Lewis and is set in the idyllic Italian countryside.

Edwardian Farm – Find out how the other half lives when two archaeologists and a historian recreate farm life for a full year using practices from 1906 England. Fascinating!

The Country Diary of an Edwardian Lady – So beautiful! Filmed on location in England and Scotland, this drama follows artist Edith Holden through the changing seasons.

Parade’s End – From the end of the Edwardian era through World War I, this epic story of romance and betrayal stars Benedict Cumberbatch and Rebecca Hall.

Mary Poppins – For something much lighter and happier, you can’t go wrong with Mary Poppins. It’s magical and fun and surprisingly thoughtful. Don’t miss it.

Miss Potter – The charming story of Beatrix Potter’s efforts to publish her first books and gain some measure of independence as a single woman in Edwardian England. Lovely and heartbreaking. Starring Renee Zellweger and Ewan McGregor.