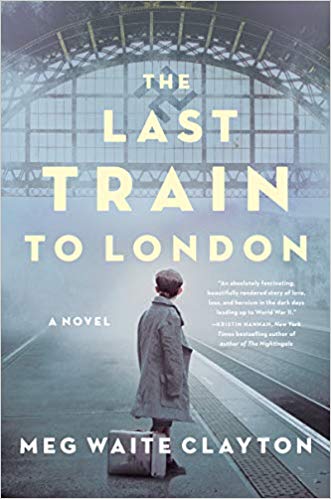 We’ve reached the end of January and the finish of our first month of the 2020 Online Reading Challenge. How was your reading month? Were you able to find a good book or watch a movie somehow related to our theme of Casablanca?

I had an very good January, reading the excellent The Last Train to London by Meg Clayton, a remarkable story of courage and determination during the dark times just before and during the early years of World War II.

The book opens in the late 1930s when Hitler’s rise to power is throwing a dark cloud over Europe. The world watches in disbelief as threats against Jews grow but Truss Wijsmuller, a Dutch woman, is not standing by; she begins escorting Jewish children out of Austria to safety at great danger to herself. Most of the children are orphans, but as conditions worsen, parents begin making the heartrending decision to send their children away, desperate to protect them.

At first the Jews of Vienna believe they are safe – after all they have been loyal Austrians for generations and many no longer practice the Jewish faith. Vienna has long been a center of art and sophistication, Mozart and opera – surely nothing bad will happen here. However, within days of Anschluss (the annexation of Austria by Germany), the rights of Jewish citizens have been stripped, their property and businesses seized and families forced from their homes.

The Last Train to London depicts real events, part of the Kindertransport rescue that saved nearly 10,000 children’t from Nazi-occupied Europe. Truus Wijsmuller was a real person, known to the children as Tante Truus, kind and warm-hearted but with the courage and determination to confront Adolf Eichmann (who was the creator of the “Jewish solution” that sent millions to their death) and insist that he allow 600 children to leave and immigrate to England. Clayton personalizes the novel by telling a story of two young adults caught up in the chaos and despair – Stephan, son of a wealthy Jewish businessman and Zofie, the daughter of an anit-Nazi journalist. Their fate becomes entwined with Tante Truus and a nearly impossible dream to escape. This is a white-knuckle, can’t-put-down novel of both the horrors humans are capable of, and of the great kindness and compassion of ordinary people. Highly recommended.