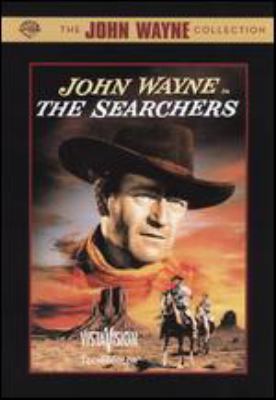 How was your August? Hmmm. Yeah, mine wasn’t great either. For one thing, it’s hard to read in the dark and for another, my DVD player doesn’t work without electricity! It’s been a crazy month in a crazy year! Let’s keep our fingers crossed for some calmer times.

I went a bit off the rails this month (surely I’m not the only one?) and did not finish Undaunted Courage by Stephen Ambrose as I had planned. Someday, I will finish it though! It’s interesting and thought-provoking but I think I needed something a little less intense. So instead, I watched a movie.

The Searchers starring John Wayne makes most “best Western movies” lists and many just plain “best movies” lists. I had never seen it or even heard of it and I’m not a rabid John Wayne fan so I kept my expectations low despite the glowing reviews. Turns out that was pretty smart on my part.

John Wayne plays Ethan Elliot, a Civil War veteran that has returned to his brother’s homestead in Texas three years after the war. He arrives with a burning hatred of all Native Americans and a forbidden love for his brother’s wife. While he’s away helping the Texas Rangers track some cattle thieves a Commanche war party attacks and burns the homestead to the ground, killing the family and kidnapping two of the young girls. Ethan goes after them, set on revenge and letting nothing stand in his way.

It’s not a terrible movie – in fact there is a lot to like. But in my opinion it hasn’t aged well. There is a lot of racism – pretty typical for Westerns and for the time period they portray, but unpleasant and jarring nonetheless, and the jokes are awkward and clumsy. Some of the actors seem to express a range of emotion by either shouting or shouting loudly.

The landscape and scenery are stunning and beautifully filmed but that brings up another issue. The movie was obviously filmed in Monument Valley, a spectacular region located in northern Arizona and southern Utah. Dozens and dozens of movies have been filmed here. The problem is, this is a pretty unique area, easily recognizable and limited to a specific location. Movies that tell you they’re taking place in Texas or New Mexico (like this one) but filmed in Monument Valley aren’t trying very hard to be realistic. It’s a minor point really and can the filmmakers can be forgiven, but it bugged me.

So how did your August reading go? Did you find something great to read or watch? Let us know in the comments below!