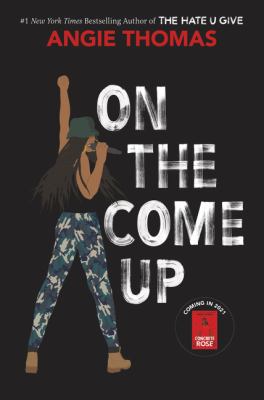 Angie Thomas is a young adult author whose breakout book, The Hate U Give , won many awards and was made into a major motion picture. That gut-wrenching novel discussed topics of police brutality and systemic racism in a timely and much needed way. Her subsequent novel, On The Come Up, was widely anticipated and pushes the narrative even more.

On The Come Up by Angie Thomas is the story of a young woman working hard to pursue her dreams. Bri wants to be a rapper. Not just any rapper though, she has dreams of becoming one of the greatest rappers of all time. Bri’s father was an underground hip hop legend named Lawless who was killed right before he made it big. Growing up hearing all the stories about her dad, but not having many memories of her own, Bri wants to make it big and be her own person. She doesn’t want to be known as Lil Law forever.

With the help and support of her aunt, Bri goes to the ring to rap battle and gain some popularity. Her aunt is even able to get her studio time to record her first song. When her first song is released, Bri is excited. She spoke from her heart when she wrote that song and can’t wait for people to actually understand more about her life. But when the song goes viral and the media picks it up, Bri discovers that it’s gaining popularity for all the wrong reasons. Now that she’s being made out to be a menace and is the center of controversy, Bri is uncomfortable with what others are saying. When her family’s financial situation grows even more dire, Bri realizes that the only way to help is to become a rap star as fast as she can. It’s not just something she wants to do, Bri HAS to make it. Her family’s livelihood depends on her.

Bad Behavior has blocked 1424 access attempts in the last 7 days.