Featured new additions to DPL’s Science Fiction and Fantasy collections! Click on the title to place a hold. For more new books, visit our Upcoming Releases page. As always, if there’s a title you would like to read, please send us a purchase suggestion.

Dark Matter by Blake Crouch – “Are you happy with your life?” Those are the last words Jason Dessen hears before the masked abductor knocks him unconscious. Before he awakens to find himself strapped to a gurney, surrounded by strangers in hazmat suits. Before a man Jason’s never met smiles down at him and says, “Welcome back, my friend.” In this world he’s woken up to, Jason’s life is not the one he knows. His wife is not his wife. His son was never born. And Jason is not an ordinary college physics professor, but a celebrated genius who has achieved something remarkable. Something impossible. Is it this world or the other that’s the dream? And even if the home he remembers is real, how can Jason possibly make it back to the family he loves? The answers lie in a journey more wondrous and horrifying than anything he could’ve imagined–one that will force him to confront the darkest parts of himself even as he battles a terrifying, seemingly unbeatable foe.

Star Wars: Aftermath: Life Debt by Chuck Wendig – In the aftermath of the destruction of the second Death Star and the defeat of the Emperor and Darth Vader, Han Solo and Chewbacca set out to liberate the Wookiee’s homeworld of Kashyyyk. Meanwhile, Norra Wexley and her band of Imperial hunters pursue the Empire’s remaining leadership across the galaxy, bringing them to justice. Wexley abandons her official mission when she receives news that Chewie has been captured and Han has disappeared. Norra and her crew race toward the Millennium Falcon’s last known location, but they can’t anticipate the true depth of the danger that awaits them — or the ruthlessness of the enemy drawing them into his crosshairs.

Imprudence by Gail Carriger – Rue and the crew of The Spotted Custard returned from India with revelations that shook the foundations of the scientific community. There is mass political upheaval, the vampires are tetchy, and something is seriously wrong with the local werewolf pack. To top it all off, Rue’s best friend Primrose keeps getting engaged to the most inappropriate military types.

Time Siege by Wesley Chu – Having been haunted by the past and enslaved by the present, James Griffin-Mars is taking control of the future. Earth is a toxic, sparsely inhabited wasteland–the perfect hiding place for a fugitive ex-chronman to hide from the authorities. James has allies, scientists he rescued from previous centuries, but he also has enemies.  They include the full military might of benighted solar system ruled by corporate greed and a desperate fear of what James will do next. At the forefront of their efforts to stop him is Kuo, the ruthless security head, who wants James’s head on a pike and will stop at nothing to obtain it. 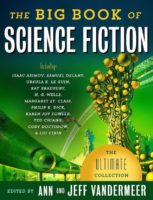 The Big Book of Science Fiction edited by Jeff & Ann VanderMeer – What if life was never-ending? What if you could change your body to adapt to an alien ecology? What if the pope were a robot? Spanning galaxies and millennia, this must-have anthology showcases classic contributions from H. G. Wells, Arthur C. Clarke, Octavia E. Butler, and Kurt Vonnegut, alongside a century of the eccentrics, rebels, and visionaries who have inspired generations of readers. Within its pages, you’ll find beloved worlds of space opera, hard SF, cyberpunk, the New Wave, and more. Learn about the secret history of science fiction, from titans of literature who also wrote SF to less well-known authors from more than twenty-five countries, some never before translated into English. Plus: Aliens! Space battles! Robots! Technology gone wrong! Technology gone right!

Night of the Animals by Bill Broun – Over the course of a single night in 2052, a homeless man named Cuthbert Handley sets out on an astonishing quest: to release the animals of the London Zoo. When he was a young boy, Cuthbert’s grandmother had told him he inherited a magical ability to communicate with the animal world–a gift she called the Wonderments. Ever since his older brother’s death in childhood, Cuthbert has heard voices. These maddening whispers must be the Wonderments, he believes, and recently they have promised to reunite him with his lost brother and bring about the coming of a Lord of Animals  – if he fulfills this curious request.  But his grand plan is not the only thing that threatens to disturb the collective unease of the city. Around him is greater turmoil, as the rest of the world anxiously anticipates the rise of a suicide cult set on destroying the world’s animals along with themselves. Meanwhile, Cuthbert doggedly roams the zoo, cutting open the enclosures, while pressing the animals for information about his brother. Just as this unlikely yet loveable hero begins to release the animals, the cult’s members flood the city’s streets. Has Cuthbert succeeded in harnessing the power of the Wonderments, or has he only added to the chaos–and sealed these innocent animals’ fates?

Bad Behavior has blocked 1748 access attempts in the last 7 days.