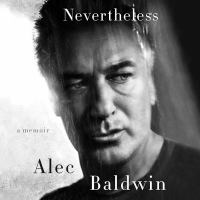 I was operating under the Southpark-inspired misconception that the worst thing about being a Baldwin is….NOTHING! Quite the contrary. The story arc of Alec’s father is an arduous downhill path. Roughly the first half of the book is a serious downer, touching on all the travails of the working class poor. Marry this with the accompanying drug problems of Alec’s burgeoning fame, and wash it down with a healthy dose of painful romances.

Of interest is the inner machinations of his rise from Knots Landing to 30 Rock, with a sidetrip down a little film called The Hunt for the Red October.

No, Alec does not gloss over his sensational answering machine message. Yes, he does wrap up this work with a somewhat inspiring testimonial of what constitutes an empowered citizenry.

Of course, Alec reads the audiobook himself with his signature snarling whisper. Not surprisingly, Alec has an expansive vocabulary and repertoire of impressions of his fellow actors. That alone is worth the price of admission.