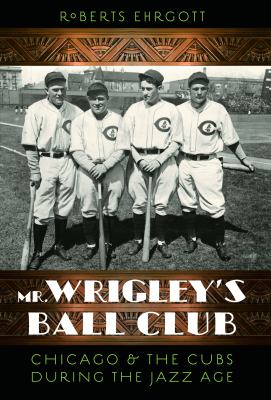 Chicago in the Roaring Twenties was a city of immigrants, mobsters, and flappers with one shared passion: the Chicago Cubs. It all began with the decision of the chewing-gum tycoon William Wrigley to build the world’s greatest ball club in the nation’s Second City. In this Jazz Age center, the maverick Wrigley exploited the revolutionary technology of broadcasting and attracted eager throngs of women to his renovated ballpark.

Mr. Wrigley’s Ball Club transports us to this heady era of baseball history and introduces the team at its crazy heart – an amalgam of rakes, pranksters, schemers, and choirboys who take centre stage in memorable successes and disasters. Readers take front-row seats to meet one Hall of Famer after another – Grover Cleveland Alexander, Rogers Hornsby, Joe McCarthy, Lewis “Hack” Wilson, Gabby Hartnett. The cast of characters also includes their colorful if less-sung teammates and the Cubs’ nemesis, Babe Ruth, who terminates the ambitions of Mr. Wrigley’s ball club with one emphatic swing. (description from publisher)