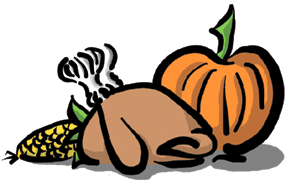 Growing up in the Quad Cities, I remember watching Bob Vogelbaugh, aka Mr. Thanksgiving, announce his annual Thanksgiving dinner on the news or the radio every year and wondering how he managed to cook up all that food by himself to feed more than 2,000 people. Now that I’m older I realize just how much he relies on donations and volunteers to make this event happen.

Vogelbaugh is a former Moline grocery store owner who began this tradition in his small grocery store more than forty years ago. His Thanksgiving feast was held at his store for seven more years until it grew so large that he had to move it to the second floor of the YWCA, where volunteers had to carry people in wheelchairs up the stairs because there was not an elevator! Now the event takes place at Southpark Mall where Vogelbaugh says volunteers are the backbone of the event. Volunteers don’t need to sign up, they can instead just show up ready to work. They also accept donations of pies at the mall office on Wednesday, November 25, or near the children’s play area at the former Deb space on Thursday, November 26.

This year is a special occasion. It is the 45th year of the Annual Community Thanksgiving Dinner. As of November 12th though, the dinner was in slight jeopardy. Vogelbaugh, in an interview with KWQC, announced that to put on this dinner, he relies on donations of around $16,000 from the community and that he was only at $4,000. Check out his interview, the QC Online website, and the Southpark Mall event calendar for more information about where you can send monetary donations and how else you can help.

If you’re interested in attending the dinner, it will be served on Thursday, November 26th, from 4 to 6pm at Southpark Mall! Need a tide? Contact Metrolink at 309-788-3360.

Bad Behavior has blocked 1682 access attempts in the last 7 days.