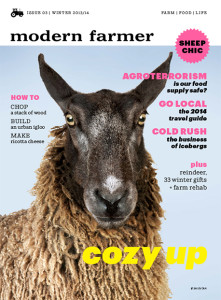 You may notice a new magazine at the Fairmount branch. Modern Farmer is a quarterly hipster/agriculture magazine . It’s a fascinating combination of actual horticultural information but with a  small-is-better vibe. There is no pretense that they are the voice of big ag. “We’re making fun of ourselves, in a way, because we don’t know anything about farming,” said former editor-in-chief Ann Marie Gardner.

The sophisticated design aesthetic is  an interesting contrast to the stories about goats, cows and pigs.  Recent stories feature news about a bird flu vaccine, as well as Brad Pitt. Some of the most inspiring articles are about young men and women trying and succeeding in diverse ventures – such as a husband-wife team of alpaca farmers in New York, a woman raising quail in California, and three young people growing papayas, coconut and other fruits and vegetables in Bali.

The magazine, founded in 2013, is struggling. It actually suspended operations earlier this year, then promised a summer issue. We hope that they can overcome their financial difficulties. It fills a unique niche, with  a point-of-view not seen in mainstream magazine publishing.