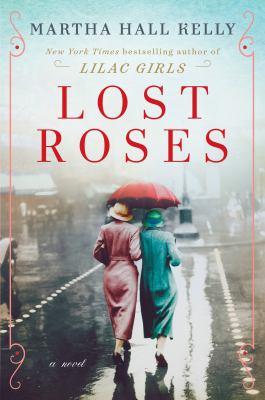 Two women from very different worlds form an unbreakable friendship, a friendship that will give them strength during the worst circumstances, even when they are far apart. Lost Roses by Martha Hall Kelly brings their story vividly to life.

Eliza Ferriday, American and Sofya Streshnayva, a Russian related to the ruling Romanovs, become fast friends when they meet in Paris. Both women are wealthy and lead priviledged lives, but are also kind and compassionate. In 1914 Eliza travels to Russia to visit Sofya, but war breaks out in Europe and Eliza must cut her visit short and return to America. Sofya and her family flee to their country estate outside of St Petersburg, hoping to ride out the war undisturbed. Russia, however, is in turmoil as revolutionaries take up arms against the Tsar and anyone associated with him. The Reds take over the Streshnayva estate, imprisoning the occupants and looting the lavish furnishings.

Sofya manages to escape their captors, but is forced to leave her young son behind in the care of a trusted servant. Now on her own, she must find new depths within herself to survive, learning to gather food in the forest, evade capture from both the Revolutionaries and the invading German army and defend herself as she makes her way across the war ravaged countryside to Paris.

Meanwhile, back in America, Eliza is frantic with worry for her friend, especially as stories from Russian emigres begin to filter in – the violence, the bloodshed and the huge loss of life. Eliza channels her worries into helping the “White Russians” who have escaped the revolution by creating an American relief organization to help them with finding jobs, housing and other aid.

By depicting World War I from within Russia, Lost Roses delivers a new facet of the time period with the addition of the chaos and cruelty that accompanied the Russian Revolution. The huge gap between the very rich, who flaunted their wealth, and majority of people who were desperately poor, is astonishing as is the way the privileged seemed to be blind to the growing danger. As shown here, the Revolution appears out-of-control with vicious in-fighting and random violence leading to little or no improvement for the working class. Lost Roses is the kind of book that is hard to put down and even harder to forget.

Lost Roses is a prequel to the bestselling Lilac Girls, which takes place during and after World War II. Caroline Ferriday, who is a main character in Lilac Girls, is shown as a young woman in Lost Roses. Author Martha Hall Kelly has announced that she is working on another prequel which will be set during the Civil War and will follow Eliza Ferriday’s grandmother.

Bad Behavior has blocked 1624 access attempts in the last 7 days.