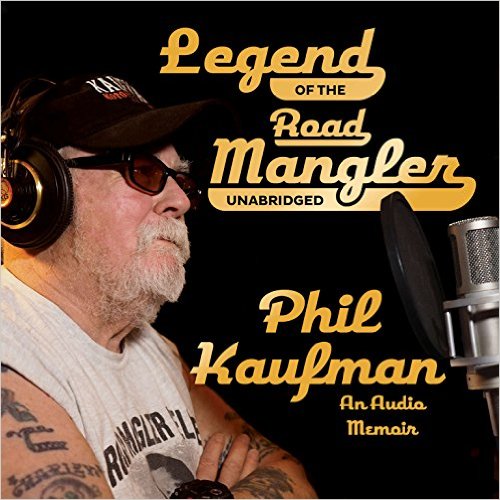 Phil Kaufman is an American record producer, tour manager and author.  He began his career as an actor and had small parts in Spartacus, Pork Chop Hill and Riot in Juvenile Prison.  His acting career ended when he was arrested for marijuana smuggling.  While he was in jail, he met the infamous Charles Manson.  After Kaufman was released from prison, he got a job driving for Mick Jagger and Marianne Faithfull.  At the time, Jagger was living in Los Angeles mixing the album Beggars Banquet.  This was the beginning of Phil’s career in music.  Mick Jagger referred to Kaufman as his “executive nanny”.

In Legend of the Road Mangler, Kaufman (who narrates the audiobook) talks about his adventures while he was on the road with the Rolling Stones, Frank Zappa, Gram Parsons, the Flying Burrito Brothers, Joe Cocker, Etta James, Emmylou Harris, Rosanne Cash, Marty Stuart, Nanci Griffith, and others.  Phil Kaufman is well known for stealing the body of Gram Parsons and burning it in Joshua Tree National Monument.  Phil tells the story as only he can tell it.  Included are the voices of the artists that know him best.

This audiobook is four hours long and it is great for a road trip!  Music fans will love the stories about what goes on behind the scenes with their favorite bands and artists.