In Last Night in Montreal, the debut novel by Emily St. John Mandel, 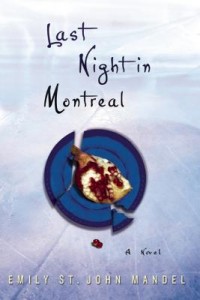 Lilia Albert’s entire life has been a series of appearances and disappearances since she was abducted by her father when she was a young girl.  By growing up this way, it is no surprise that she continues to weave in and out of other’s lives as an adult.  During a short stay in New York City, she meets Eli and swifty moves in with him.  Early one morning after telling Eli she is going for coffee, she fails to return and after looking everywhere for her resigns himself to the fact that she has disappeared.  Some time later, he receives a postcard stating that she is now living in Montreal and he leaves on a quest to find her which leads him on a strange and unexpected journey.  St. John Mandel threads the past and present together with an ethereal quality and tells the story of Lilia and those she has left behind throughout her life.  I really loved Mandel’s writing and characters, but I have to admit the ending left me with more questions than answers.  St. John Mandel has proven to be a gifted writer and I have just started her second novel, The Singer’s Gun, which I hope to blog about soon.