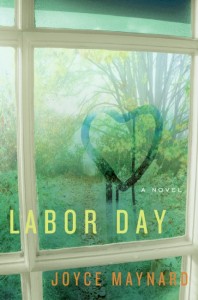 They were just six days at the end of a miserably hot summer. Yet to 13-year-old Henry those six days will change everything about his life in Labor Day by Joyce Maynard.

For Henry, the days pass monotonously – his emotionally fragile mother Adele has mostly checked out of life, rarely leaving the house. His father has a new family on the other side of town. Henry, lonely and awkward, and at that stage when you know so much and yet so little, just wishes something would happen. And then, Frank, bleeding and limping, walks into their lives. Henry has no idea how different he will be in six days. He will learn how to bake a pie, how to throw a baseball, the pain of jealousy and betrayal, and the power of love. Those six days will shape him into the man he will become.

Frank is an escaped prisoner who has been serving time for murder who seeks sanctuary with Henry and his mother. He is kind and thoughtful and soon Adele and Frank fall in love. They make plans to escape together to Canada. Henry struggles with this new person in their lives – relief that he is no longer the only person responsible for his mother’s happiness, fear that he’ll be left behind.

Narrated by Henry as an adult looking back on those six days, you hear the angst of the teenager softened by the perspective of time. It is written with simplicity and eloquence and a sympathetic understanding of the emotional complexity of people. The extended epilogue –  particularly the last sentence – brings the story to an especially yet realistic satisfying conclusion.

Bad Behavior has blocked 2282 access attempts in the last 7 days.