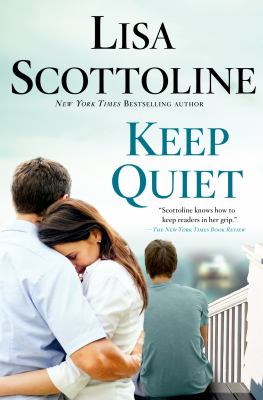 Keep Quiet by Lisa Scottoline is a gut-wrenching book that begins by introducing Jake Whitmore, his son Ryan, and Jake’s wife, Pam. Tensions seem to be running high in the Whitmore family, stemming from Jake’s loss of job a year ago. The family bore the brunt of his frustration and as a result, Ryan distanced himself from his father and became closer with his mother. Jake and Pam went into therapy to rebuild their relationship. Their current focus is on bringing Ryan and Jake closer together.

Jake is sent to pick up Ryan from the movies when they get into a car accident. This accident threatens the stability of their family and the tenuous relationships that hold them all together. Ryan’s future is on the line and in a split-second, Jake makes a decision that saves his son from a disastrous future. While at the time this seems like the best decision, it instead sends them both down a dark spiral of secrets, lies, and immense guilt. Jake thinks he has everything under control, but someone emerges from the woodwork with the power to destroy his carefully laid plans and expose Jake and Ryan’s dark secret. That life changing accident holds the power to destroy all their lives and Jake is struggling to hold the family together. This book is an intensely powerful guilt-laden journey into the lives of a family who are trying to redeem themselves while their whole world is unraveling around them.

Bad Behavior has blocked 1327 access attempts in the last 7 days.