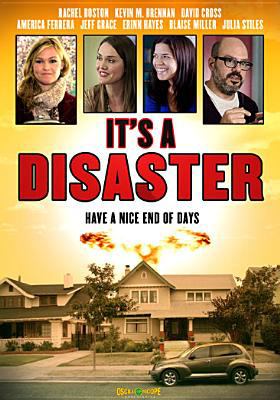 I picked up It’s a Disaster because I saw David Cross on the cover, and went in with low expectations (I mean, he was in all three Alvin and the Chipmunks movies). The cover on the dvd looks cheesy (a shame, since the theatrical poster is so fantastic) and the premise seemed a tad forced:

Four couples meet for Sunday brunch only to discover they are stuck in a house together as the world may be about to end.

But I was pleasantly surprised.  Julia Stiles, America Ferrera, David Cross, and Erinn Hayes are all fantastic in this dark comedy. Written and performed with the pacing of a play, It’s a Disaster is for fans of live theater and comedy shows.

What makes this movie stand out from other independent comedies is the fantastic build-up.  The first part of the film is paced slowly and leads the viewer to believe that this will be a standard examination of the relationships of people in their thirties.  As the story progresses, there are a smattering of twists and surprises (some much more surprising than others) that help build on the film’s twisted sense of humor.   Don’t be surprised if you’re left asking, how would I react if I knew I only had a few more hours to live?

Fans of The House of Yes, Igby Goes Down, and Election or anything featuring David Cross should give this movie a try.