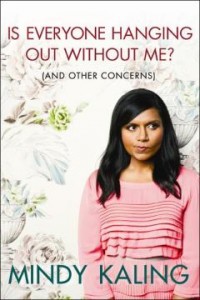 It’s hard to choose a favorite supporting character on The Office, but I consistently enjoy the self-absorbed airheadedness of Kelly Kapoor, played perfectly by writer and actress Mindy Kaling.  So imagine my excitement when I found out that Mindy was about to release a book of humorous essays called Is Everyone Hanging Out Without Me? And Other Concerns.  In the book, Mindy tells stories about her childhood, how she dealt with living in New York  in her 20s while trying to get discovered, and what it’s really like to work on The Office.  There are also a lot of funny and seemingly-random chapters on things like “karaoke etiquette”, why she likes guys with chest hair and her top eleven favorite comedic moments in film and TV.  By the end, despite the fact that I was thoroughly entertained, I was mostly sad that Mindy and I aren’t best friends.  She writes in such a laid-back, conversational tone and is so relatable despite her fame that it really feels like you’re chatting with one of your good friends.

I find it hard to summarize books like this, so instead, here are a few of my favorite parts and things I learned:

This book inevitably gets compared to Tina Fey’s Bossypants (another excellent book that you can read more about here), and while Kaling and Fey are very different women, both have written laugh-out-loud books that I highly recommend.

Bad Behavior has blocked 1147 access attempts in the last 7 days.