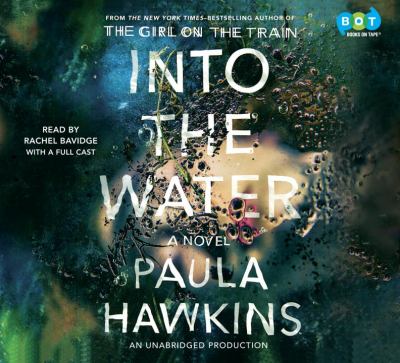 The second book by the author of the bestselling mystery The Girl on a Train will not disappoint!

Into the Water takes place in a rural Beckford, England. A river flows throughout the town; with so many twists and turns that one character comments that, “everywhere you turn, you run into the river”. But there is a particular place in the river that is famous in the town. The Drowning Pool. There is no mystery as to why it is called the Drowning Pool. The first page of the book introduces the reader to a young woman that is being tied up and forced into the water. We quickly learn about the latest victim of the Drowning Pool, Nel Abbott. Nel had been researching the former victims of the Drowning Pool for a book. It turns out that women have been found submerged in the river for hundreds of years. While it looks like a suicide some people wonder if there was foul play. Nel Abbot had made enemies.

Nel’s sister Jules comes to Beckford to take charge of her niece, Lena. Lena has not only lost her mother, but a few months earlier, she lost her best friend to the Drowning Pool. People are unsure why Katie Wittaker decided to commit suicide. Katie’s mother, Louise is having a terrible time coming to terms with her daughter’s death. Louise’s son, Josh, notes that the night that Nel Abbott went into the water, Louise was gone for most of the night. When detective Erin Morgan, who is new to town, asks people about Nel Abbot, it seems that no one really cares that she died. Except of course, her family, Jules and Lena. To complicate matters, Jules has been estranged from her sister for quite some time. So Jules and Lena do not know each other at all. Throughout the book, we learn more about Nel Abbott and Katie Wittaker and the people in their lives. The more that we learn, it becomes harder to trust anyone in Beckford.

If you listen to audiobooks, you will enjoy this one. Into the Water is read by five voice actors and they do a wonderful job. Read by Laura Aikman, Sophi Aldred, Rachel Bavidge, Imogen Church and Daniel Weyman.