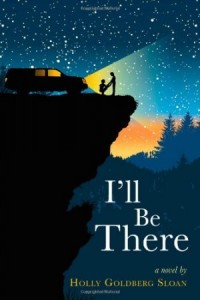 I’ll Be There by Holly Goldberg Sloan is a story about love and devotion and friendship, about hanging on and believing in yourself and trusting the right people. It’s about how we touch other lives, often without knowing. It’s a family drama and a survival story and a romance rolled into one can’t-put-down story.

When 17-year-old Sam meets Emily, his life is a mess. Worse than a mess – it’s hopeless. His abusive father snatched Sam and his little brother Riddle from their backyard a decade ago. Since then, Sam has protected Riddle (who is sickly and no longer talks), takes care of him and absorbs most of the punishment their father hands out. They aren’t allowed to go to school – Sam teaches himself as best he can – how to swim, how to play the guitar – and keeps up with the world by reading magazines discarded in dumpsters. They move constantly, one step ahead of the law, and making friends is impossible.

Emily Bell is mortified about singing a solo at church. It doesn’t matter that her father is a professor of music, she’s a terrible singer. Her Dad insists, she manages to muddle through the song (badly off-key) by locking eyes with the mysterious boy sitting at the very back pew. They make a connection and she gets through her ordeal – barely. The minute she’s finished she rushes outside to be sick. That’s where the mysterious boy (Sam) finds her, holds her hair and tells her it’s going to be ok.

It takes some persistence, but Emily finds Sam again and they become friends. Sam is wary and is protective of Riddle, and tries to shield Emily from his background but gradually, through kindness and attention, Sam becomes part of Emily’s family. Emily’s parents take to the boys – her father discovers that Sam is a musical prodigy and encourages his talent and her mother recognizes that Riddle needs to be treated for asthma and that both boys are desperate for love and family. For the first time in a long time, Sam and Riddle have some hope.

It all comes crashing down when their father discovers that the boys have made friends and he once again snatches them away and goes on the run. The story of the boys struggle to survive their harsh new reality and Emily and her parents search for them will keep you up reading very late at night – Sloan masterfully creates and maintains an almost unbearable tension throughout the book. (I have to make a confession. About two thirds of the way through, I skipped ahead to the end to find out what happened. The tension was just too high, the need to know just too strong. Then I went back and read the part I’d missed!) The characters she creates are amazing – complex and believable. I especially liked the various relationships – especially between Riddle and Emily’s Mom and between Sam and Riddle. They (and the whole book) show that love comes in all sizes and shapes and can save you no matter how bad things look. Read this book – you won’t be disappointed.