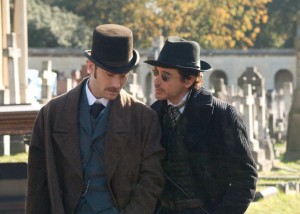 We have a display for you! At both Main Street and Fairmount Street libraries, we have mysteries and DVDs of Sherlock Holmes spinoffs.

The Beekeeper’s Apprentice by Laurie King  is the first in a series featuring a feminist Mary Russell. A teenager at the time, she meets the great Holmes  while she is wandering the Sussex countryside. Holmes mentors Mary as they investigate the kidnapping of an American senator’s daughter. The World WarI era , an Oxford setting – where Mary is a student, and the evolving relationship in which Holmes mentors his young protegee are all strong points of the novel.

The Italian Secretary by Caleb Carr is a humorous paranormal twist on the Holmes canon. The setting is a ghostly Holyrood Palace in Edinburgh,Scotland. Watson and Holmes are called in by Sherlock’s brother to investigate murders that Mycroft fears may threaten Queen Victoria. The author of The Alienist “reflects a deep knowledge and understanding of Holmesiana.” Publisher’s Weekly

Bad Behavior has blocked 1855 access attempts in the last 7 days.