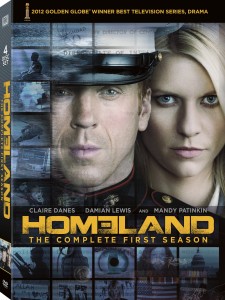 Showtime’s critically acclaimed series Homeland stars Claire Danes as CIA counterterrorism agent Carrie Mathison, who has just received startling information from one of her contacts: an American POW has been turned.  Months later, US Marine Nicholas Brody (played expertly by Damian Lewis) is found alive in Afghanistan after being presumed dead for eight years.  Though his return is heralded as a great victory and he is touted as a war hero, Carrie is certain that he is working for al-Qaeda.  She goes behind the back of her superiors, setting up illegal surveillance equipment in Brody’s house and monitoring him at all times, doggedly pursuing the truth at any cost.

I could give you a list a mile long of adjectives describing how great this show is (compelling, thrilling, captivating, mind-blowing, etc.), but nothing I can think of really does it justice.  The acting, particularly Danes in her portrayal of a very zealous woman suffering from bipolar disorder, is absolutely superb.  The story will grab ahold of you and not let you go, with twists and turns that constantly keep you guessing where Brody’s allegiance lies.  I finished the entire first season of this show in about two days because I couldn’t stand to not be watching it.  I highly recommend picking up a copy of this series, but make sure you plot out several hours of free time to watch it.  Once you start, you won’t want to stop.