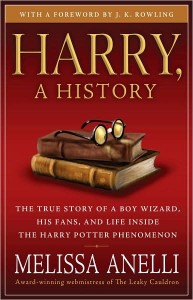 Since Harry Potter and the Deathly Hallows, the final installment in the seven-part Harry Potter series, was released two years ago this summer, I have been receiving the same question over and over again by those who know I am a Potterhead: “Sooo what will you do now that Harry Potter is over?” And my answer usually is: “Well, the same things that Star Trek fans do.” For a more descriptive answer, I recommend they read Harry, A History: The True Story of a Boy Wizard, His Fans, and Life Inside the Harry Potter Phenomenon by Melissa Anelli.

In Harry, A History, Anelli shares her experiences of how the Harry Potter fandom was born from her “front row seat” as Webmistress of the beloved Harry Potter news site The Leaky Cauldron. Over the years, Anelli’s work as a top fan journalist has resulted in her development of friendships with the key Harry Potter insiders including publishers, editors, musicians, actors, and even the grand authoress herself, J.K. Rowling, who gave Anelli an exclusive interview for the book. Anelli gives new insight into how Harry Potter was created and published, but most of the book focuses on how Harry Potter fans developed their community online, and thus, has played a significant role in the evolution of global commerce and intellectual property rights on the web.

As a die-hard fan, I was already familiar with “potterwar,” the fan-organized boycott against Warner Brothers in response to their attack on Harry Potter fansites, but I was fascinated by the section on how the organized worldwide releases of the later Harry Potter books were due to Americans buying Harry Potter and the Chamber of Secrets, the second book in the series, from amazon.uk (which displeased both amazon and the U.S. publishers) before it’s release in the United States. Anelli does a wonderful job speaking to a variety of audiences and Harry, A History will appeal to both long-time and new Harry Potter fans alike, in addition to those interested in contemporary culture and the digital generation.

If you are interested in the history of Harry Potter and the Harry Potter fandom, you may also want to check out We are Wizards–a documentary focusing on several fans including Anelli. The film is currently viewable for free on hulu.com. Beware, this film does contain adult content.